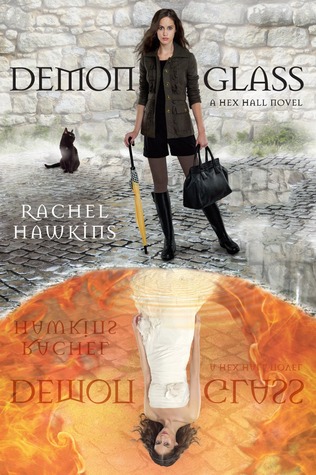 Sophie Mercer thought she was a witch.

That was the whole reason she was sent to Hex Hall, a reform school for delinquent Prodigium (aka witches, shapeshifters, and fairies). But that was before she discovered the family secret, and that her hot crush, Archer Cross, is an agent for The Eye, a group bent on wiping Prodigium off the face of the earth.

Turns out, Sophie’s a demon, one of only two in the world—the other being her father. What’s worse, she has powers that threaten the lives of everyone she loves. Which is precisely why Sophie decides she must go to London for the Removal, a dangerous procedure that will destroy her powers.

But once Sophie arrives she makes a shocking discovery. Her new friends? They’re demons too. Meaning someone is raising them in secret with creepy plans to use their powers, and probably not for good. Meanwhile, The Eye is set on hunting Sophie down, and they’re using Acher to do it. But it’s not like she has feelings for him anymore. Does she?

Demonglass is book two in the Hex Hall trilogy by Rachel Hawkins. I liked Hex Hall and the humor that sets it apart from other paranormal boarding school type books. Demonglass continues down the same witty and action-packed path and is as enjoyable as it’s predecessor.

This time around it’s Summer break and our spunky heroine Sophie packs her bags for England where she gets to bond with her dad before going through the Removal process. She wants to have her demon powers removed so that she can avoid hurting those around her. But even though the setting has changed from boarding school to English mansion, some of Sophie’s friends end up tagging along. She brings along her best pal Jenna the vampire and unexpectedly Cal, the school healer is asked to join them as well. A few other familiar faces turn up too to cause mischief and mayhem. I liked the mansion setting and the addition of the new characters to freshen up this installment. It was a nice surprise to see Sophie’s father and learn more about him to satisfy my curiosity from the first book.

In addition to learning more about her heritage and her demon powers, Sophie is still dealing with the aftermath of her entanglement with Archer. She is conflicted about her feelings for him, and to complicate matters he has also been spotted in England. The stage is set for Sophie to star in a love triangle with the dangerous warlock Archer and the older and father-approved healer Cal.

Sophie has some excitement in England when she gets caught up in a mystery with some new friends. She gets to play with her powers and it is fun to see her around other paranormals in these situations. The new characters bring a sense of the unknown, as it is hard to know whom to trust.

Overall this is a fun, fast-paced and action packed series and fans of the first book won’t be disappointed with the sequel. The game changing ending has me anticipating the final book in the series. I recommend this series to fans of YA paranormals such as Paranormalcy, Clarity or the Mortal Instruments. The final Hex Hall book is due out in 2012 so there is plenty of time to catch up with this series.

One thought on “Demonglass (Hex Hall #2) by Rachel Hawkins”