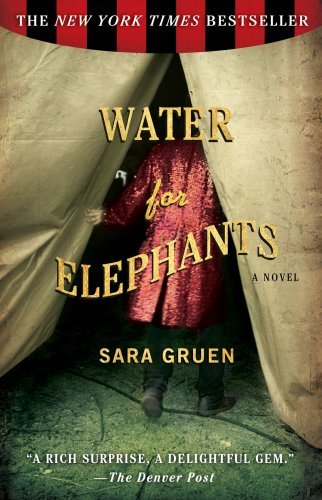 Thoughts on the book:

What an enjoyable book! I wasn’t sure this book would be for me because of the circus setting, and I’ve never been a circus fan. However, I kept hearing how great it is and I added it to my top 10 list of books to read this year.  (Two down, eight to go) I ended up liking it quite a bit. The characters are well rounded and believable.  The story flows nicely with descriptive details that set the tone of the era. It’s obvious the author did her homework with the historical facts and the behind the scenes info on the circus.

Water for Elephants tells the life recollections of “93 or 95” year old Jacob Jankowski. He is in a nursing home and reflecting on his life spent with his wife and children, and the memorable time he spent working as a vet for the Benzini Brothers circus. The story is told in present day at the nursing home and flashbacks to 1931 to the circus.

This book was fascinating and held my interest with all of the details of life at the circus. The story has drama, romance, friendships and suspense. All of the main and side characters are intriguing and help to paint a vivid picture of the circus life. The animals also play a big part in the book, especially lovable Rosie the elephant. Regarding the animals, I was expecting the scenes of animal cruelty, but it was still hard for me to read. The book was educational and helped me to look at the time period and at circuses in general in a new way.

My goal was to finish this book before I saw the movie, but I didn’t quite make it. I read about 80% of it before the movie. I’m glad it turned out that way though, since it made the movie ending a surprise.

I recommend this book to any fiction readers or anyone who liked the movie. This one is a good crossover book for YA fans- it is a fast read, and a good historical, with interesting characters and relationships. I’m curious to read more from Sara Gruen. 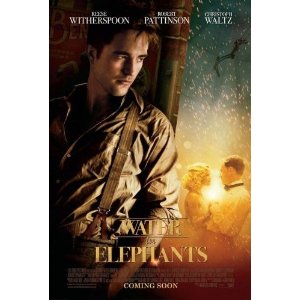 Thoughts on the movie:

I was very pleased with the movie adaptation. The look and feel of the film was gorgeous and captured the flavor of the book. The movie gave me a feel of the Depression and Prohibition era. The film was emotional, touching and well-done overall.

The lead actors Robert Pattinson and Reese Witherspoon fit the roles of Jacob and Marlena very well. Like others have said, their chemistry together was not the best, but individually they were successful in the roles. Christoph Waltz was a stand out in his performance as the villainous August. He is just as scary as in the book and commands the screen with every scene he is in. The supporting cast, particularly the actors portraying Walter and Camel were just as I pictured. And Rosie the elephant stole the movie overall. I was cringing watching the scenes where August would punish Rosie.

The movie was faithful to the book for the most part. Most of the plot points from the book appear in the movie, but sometimes in an edited or sanitized manner. The scenes of older Jacob appear as bookends rather than throughout the movie. This worked fine for the film and we still got the gist of his character. The Uncle Al character is cut out of the movie, so August is the only villain. I didn’t notice the change right away, and it did not hinder my enjoyment of the film.

Fans of the book should be pleased with the film adaptation. I think it would appeal to fans of The Notebook. Go see it and read the book!

Catching up with Outlander
Kat, Incorrigible by Stephanie Burgis