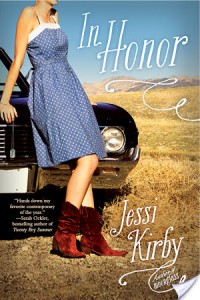 Also by this author: Golden, Things We Know by Heart

A devastating loss leads to an unexpected road trip in what Sarah Ockler calls a “beautiful, engaging journey with heart, humor, and just a pinch of Texas sass.”Three days after learning of her brother Finn’s death, Honor receives his last letter from Iraq. Devastated, she interprets his note as a final request and spontaneously sets off to California to fulfill it. At the last minute, she’s joined by Rusty, Finn’s former best friend. Rusty is the last person Honor wants to be with—he’s cocky and obnoxious, just like Honor remembers, and she hasn’t forgiven him for turning his back on Finn when he enlisted. But as they cover the dusty miles together in Finn’s beloved 1967 Chevy Impala, long-held resentments begin to fade, and Honor and Rusty struggle to come to terms with the loss they share. As their memories of Finn merge to create a new portrait, Honor’s eyes are opened to a side of her brother she never knew—a side that shows her the true meaning of love and sacrifice.

In Honor is a lovely book about family, grieving, road trips, leaving home and love. It’s a perfect summer read that’s a breath of fresh air and left me feeling hopeful and warm inside. The book cover and title perfectly match the story too. My only complaint is that I wish it were longer.

In Honor is about a girl named Honor whose brother Finn died during military service in Iraq. She’s just attended his funeral at home in Texas and is preparing to leave for college. But a surprise letter arrives in the mail from her deceased brother with a special request. His letter sends her on a road trip to California to fulfill his wish for her. Along for the ride is Finn’s estranged best friend Rusty, and the road trip is just what the two of them need to work through their grief and complicated feelings towards each other.

The road trip is an emotional journey for Honor and Rusty, and though they are not their first choice of traveling partner, they are really the only ones who understand the loss they are feeling.  I liked how the story began in the middle of this devastating event and then the details and history slowly unfolded over the course of the road trip. The pacing is just right and the trip takes you to unexpected places.

This book is all about the characters and both Honor and Rusty are refreshingly imperfect and real. Since the two are lifelong friends they know how to push each other’s buttons and you can feel the weight of their history and the tension between them. It has been said that the character of Rusty is partly inspired by Tim Riggins of Friday Night Lights and I definitely got that vibe from him. It’s not so much the dialogue (there’s no “Texas Forever” for instance) but just from his quiet assuredness and cockiness, and he also sticks his foot in his mouth occasionally. Honor is a good match for Rusty and she calls him out on things and learns some things herself along the way. All of the side characters they meet on their journey are wonderful too.

Like I said, the book ended sooner than I would have liked. I wanted to stay with the characters a little more and see how things progressed, though the ending was kind of perfect as is too. A healing journey mixed with dancing, awkward moments and drunken regret, In Honor hit all the right notes with me. This is the first book I’ve read by Jessi Kirby, though I have her first book Moonglass on my shelf. She’s a contemporary author to watch for. I think if you’re a fan of Amy & Roger’s Epic Detour you should give this book a try.

12 thoughts on “In Honor by Jessi Kirby”