It’s Wednesday and time for another edition of The Movie Date! The Movie Date is a new weekly feature where we discuss movies that may appeal to the YA audience. My husband Andrew is back again with another movie review to share. This week’s movie date is Moonrise Kingdom, directed by Wes Anderson. Take it away, Andrew! 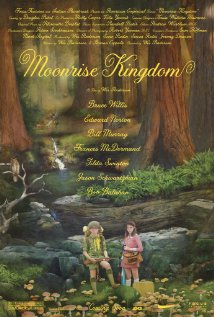 A young female bookworm eager to turn her life into a novel-worthy adventure? Read on, dear reader…

Wes Anderson is an iconoclastic and witty director of independent films that all seem destined to become “cult classics.” And it’s really pained me that none of his films has ever resonated perfectly for me, and I’ve seen or read part or all of them. Though they’re meticulously made and frequently funny and charming, they strike me as somehow sarcastic, mocking the characters we’re supposed to like, which keeps me at a distance. Only The Fantastic Mr. Fox, his puppet-animation version of a classic children’s book, engendered any sympathy on my part, with its nonhuman and physically stiff characters somehow more flexible and cuddly than most of Wes’ “real people.”

So I was excited that Moonrise Kingdom, his seventh feature in eighteen years, was getting good marks. And suffice to say I liked it a great deal. At its heart is a charming tale of defiant young love, and Wes seems to show genuine affection rather than mockery towards his teen/tween leads. Surrounding them is Wes’ typically A-list cast doing typically silly things; this becomes one of those stories of Wise Kids Surrounded By Foolish Adults.

It takes place in early September (1965) and feels as lazy and languid as Indian summer. We find ourselves on a (mythical) island off the coast of New England at a camp for Boy Scouts (here called Khaki Scouts), where one of the young lads, a strongheaded orphan named Sam, has disappeared, taking camping supplies and a canoe with him. Across the island, Suzy, a young lady, has vanished, too, leaving behind her large home full of noisy adults and classical-enthusiast younger brothers. They meet, and we learn that based on an encounter the previous summer and a furiously romantic pen-pal relationship, the two troublemakers have decided to run off together.

Sam has all the outdoor skills, of course, and Suzy’s got a good handle on the entertainment, having brought only a record player and books. Lots of books. As an avid reader, she’s brought along at least a dozen intriguing juvenile titles. Anderson goes to some trouble to invent these books, some of whose gorgeous covers can be seen here. (Anderson was so taken with the books’ fantasy worlds that he wrote excerpts from each of them, had the Suzy character read the excerpts, animated them, and created this short film.)

During the course of their adventures, Sam and Suzy grow closer, but fate intervenes: Sam’s fellow Khaki Scouts join together to “rescue” their comrade and a local island cop (played by Bruce Willis) helps out. But when they realize the boy has lost his foster home and is due to be sent to a juvenile institution, they set about rescuing him again—not from the wildnerness this time, but from a world of heartless adults. Along the way Sam and Suzy pledge their very serious young love, Romeo and Juliet style, but their resolution is anything but tragic.

This is a comedy through and through with all the quirky Wes Anderson trademarks, including some purposely stiff and stilted acting, but for a change it’s got a very big heart. Its gentle whimsy and lack of genuine danger makes this perfect for casual summer viewing. I’d imagine that most Reading Date readers would love to run off with a suitcase full of good books—and a trusty Khaki Scout willing to help carry it.

Moonrise Kingdom is now playing in select cities – check the official site to see when it’s playing near you!