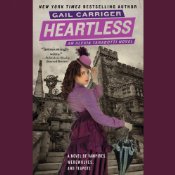 It’s been almost two years since I last read a book in the Parasol Protectorate series. Seeing Gail Carriger at Comic-Con reminded me that I needed to catch up on the books, especially now that the series is complete. This is the first book of the series I’ve listened to in audio format. A risky proposition for book four when you already have a feel for how the characters should sound.  But Emily Gray is a truly marvelous narrator and brought the parasol protectorate world alive. Heartless is as witty and surprising as I’ve come to expect from this author and delivers some surprising twists to set up the last book in the series.

In this latest installment of Carriger’s steampunk series, Alexia and Conall are reunited and preparing for their new addition. But it’s not all hearts and flowers for those two- someone is trying to kill Queen Victoria after all, and Alexia is on the case. Along the way, Alexia makes some personal discoveries and uncovers secrets about her close associates. I’m glad I waited to read this book until I had the last book in the series on hand because this book made me eager to keep reading.

I like the mystery of this series, the charm, and the setting, but the characters are I think my favorite part. They are so exaggerated and make the books so much fun to read. And even in book four we find out some unexpected tidbits about familiar characters. Ivy and Lord Akeldama are in fine form in Heartless as usual, and Biffy also becomes a more central character. I was pleased to find out the origin of the “Parasol Protectorate” in this one and I liked the way the amusing way the secret unfolded.

Emily Gray reads the audiobook and deftly handles all of the different characters and accents. Listening to the books is really a treat and made me wish I’d listened to the whole series. Gray has a great grasp on the characters and captures all the right nuances. The voices are distinct and consistent and she reads with a brisk, even pace. Lord Akeldama and Ivy sound just how I’d imagined, and I also enjoyed her no-nonsense Alexia as well as all the other characters.

After listening to Heartless, I immediately moved on to the last book in the series, Timeless. They go together hand in hand almost like a two-part finale. I don’t read a lot of urban fantasy or steampunk but for some reason I can’t resist this fun series.  I especially recommend the audiobooks if you are so inclined.