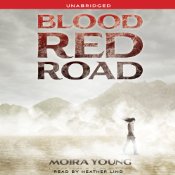 I read the book Blood Red Road upon its release last year and liked it a lot. It has a different vibe than the other YA dystopians on the shelf and it’s one I recommend frequently. With the sequel Rebel Heart’s forthcoming release, I wanted to get a refresher and listened to the audiobook. Good thing I did, because I forgot a lot about the book and even some of the characters. The author’s distinctive writing style translates well to audio, and I think I enjoyed listening to the book even more than reading it.  The story holds up well and is as action packed and intense as ever.

Blood Red Road is the story of a girl named Saba whose life falls apart when four cloaked horsemen kidnap her twin brother Lugh. She sets out to rescue him, and much to her dismay her little sister is along for the ride. Saba and her family have lived in isolation in the sandstorm-stricken Silverlake, and now she has to venture into the scary unknown to try to keep her promise to her brother. On her journey she finds out what she’s really made of as her character faces several dangerous challenges.

Saba ‘s strength and determination made me root for her. She rises to every challenge and doesn’t back down from her chosen path – a true survivor. She’s not perfect, and she still has a lot to learn, but I liked seeing her come into her own and grow throughout the book.

Along the way Saba meets several characters on her journey, some more helpful than others. The secondary characters fill in some of the missing details in Saba’s knowledge about the politics of their world. Some of the characters are fairly mysterious and I hope to find out more about them in the sequel. I also liked the dynamic between Saba and her love interest Jack and am curious to see how that progresses.

One thing that tripped me up a little when I read it the first time is the writing style. Saba’s character can’t read or write and her character’s dialogue is written phonetically. I found it a bit of a challenge to get through initially, but eventually I was caught up in the story and appreciated the style choice. With the audiobook, Heather Lind narrates with an accent and makes it easier to get immersed in the story. She gives a distinct voice to all the characters and brings them to life. Lind does a nice job portraying Saba in her different emotional states, and also Jack sounds just about how I’d imagine he’d sound. In this case, I think the audiobook experience improves upon the book and I can’t recommend it highly enough.

Though I like all the action and adventure of the entire book, the first half sticks with me more. Listening to it again helped me to fill in some of the holes in my memory from the second half, getting me up to speed for the sequel. Being the first book of a trilogy, there are a lot of mysteries left unsolved, though the book is still pretty satisfying on it’s own. I’m looking forward to the rest of this series, and think Blood Red Road has the potential to be a very cool movie.