The Movie Date is a weekly feature where we discuss movies that may appeal to the YA audience. Andrew is The Reading Date’s resident movie critic and this week he discusses a spooky movie from 2011 for your Halloween viewing pleasure:  Dream House. 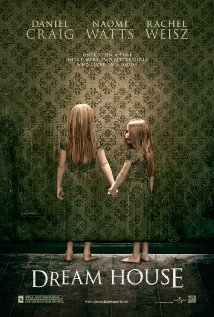 A big-city editor moves to the suburbs with his wife and kids, but is terrified to learn that their home was a murder site years earlier—and fears the killer may return to the house.

This is a quiet and sentimental film that takes a while to get going. With stars of the caliber of Daniel Craig and Rachel Weisz and a director like Jim Sheridan, you know that something serious is going down. (Naomi Watts is here too, as a next-door neighbor with dark secrets.) But the first act of the film is deceptively sweet, with the two stars playing an affectionate and playful couple and their charming daughters adding to the warmth.

But one night Will (Craig) hears a sound and goes to investigate; he’s surprised to find not ghosts but a gang of very real goth teenagers partying in his basement! Based on their hints, Will discovers that a man named Peter Ward murdered his wife and two daughters on that very site five years earlier. Even worse, he learns that Ward is soon to be released from a nearby asylum, and he goes to investigate, hoping to meet the man…

From here the film goes into some very unexpected places. Without giving anything away, I’ll say that the story undergoes a twist that would do M. Night Shyamalan (The Sixth Sense) proud. But at that point the film is less than halfway over; where will they go from here? We’re used to twist endings, but not twist middles. Yet the effect is entirely appropriate here; it informs the rest of the film to tell an unusual, unique, and touching story. With elements of romantic, psychological, supernatural, and crime thrillers, the mood is reminiscent of the 1990 film Ghost (without the comedy, of course).

This is a great film for the Halloween season if you’re not in the mood for monsters or gore; you’ll find a quietly haunting yet satisfying tale with a sweet romance and big family hugs at its heart.

Dream House is 92 minutes long, rated PG-13, and is now available on DVD.

SPOILER ALERT: The trailer below reveals much of the film’s plot—including the twist referenced in the review! If you don’t want to get spoiled, stop watching the trailer at about 1:10. You have been warned!