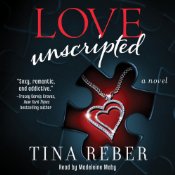 Love Unscripted has a really cute concept featuring a romance between an A-list actor and a small-town girl.  There are so many unique challenges (and perks) that come with fame and Ryan and Taryn deal with them all. This audiobook is about twice as long as it needs to be and the melodrama does gets tiresome after awhile. But on the other hand the leisurely pace allows you a lot of time to get familiar with the characters. At times I just wanted the audiobook to end already- it all just got to be too much. However, my interest got renewed when I was on vacation and I ended up listening to the sequel as well. So, I guess the characters did win me over after all.

Taryn Mitchell runs a pub in Seaport, Rhode Island. She hasn’t had an easy life and has had her share of romantic heartbreak. The town is abuzz with the news that Hollywood star Ryan Christensen is filming his latest movie in their neck of the woods. Taryn doesn’t follow the tabloids and barely knows who Ryan is. One day he ducks into the pub to avoid some screaming fans and Taryn comes to his rescue. Sparks fly between the two, but can this unconventional pairing survive the trappings of fame?

Ryan is a sweet guy and kind of a reluctant star. He loves to act, but is not too enamored with the fame aspect. The paparazzi and fans are a constant thorn in his side, and he wishes for a simpler life. Taryn seemingly can give him that, but Ryan needs to find a way to blend the acting with the personal life he desires.

Taryn has been burned before, so is wary of Ryan’s affection. Her insecurity leads to mistrust and communication issues. Taryn has business smarts but she doesn’t trust her instincts in her romantic relationships. And the fans and costars in Ryan’s life competing for his affection don’t ease her anxiety one bit.

I kind of had a love-hate relationship with this story. The premise is really interesting to me, and I liked the characters, romance and the celebrity/normal girl pairing. But the scenarios repeated like a broken record- all the trust issues, and whining about the press and the fans. I like a good angsty story but this was just a little over the top and soap opera-y for my taste.

One thing that helped make the story easier to digest is Madeleine Maby’s narration. I find long books work better for me in audio format and test my patience less. Maby holds up well through the 22 hour + audiobook and is pleasant to listen to. Her voice is age appropriate for Taryn and helped me “get” her character. I really liked her confident, natural voice for Ryan and the other male characters as well. Maby is a narrator I’d listen to again.

Even though I thought the book was uneven overall, I liked it enough to read the sequel, Love Unrehearsed. (And I have to say the sequel is a better-paced read and I’m glad I stuck with it.) I do like the characters, even though they over-stayed their welcome a bit. There are a lot of very favorable reviews for this book, so if you like romance and the premise sounds good consider giving it a try.

One thought on “Love Unscripted by Tina Reber Audiobook Review”