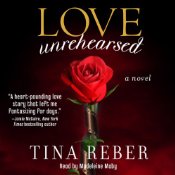 Love Unrehearsed is the second book in the Love series by Tina Reber. (The first book is Love Unscripted) The concept of the series is that a regular girl and an A-list actor fall in love. There are a lot of obstacles on the couple’s road to happiness but they are determined to make it work. I liked the first book, but thought it was a little too long and angsty for my taste.  The sequel has a more even pace, and the angst is turned down a notch. It’s a satisfying conclusion to Ryan and Taryn’s story.

In book two, Taryn and Ryan are navigating Hollywood life together. Taryn has to adjust to being in the public eye now that she’s photographed frequently with Ryan. Taryn wants to fit into Ryan’s world, and tries to educate herself on the movie business to be an asset to Ryan. The paparazzi, fans, and costars are still a distraction, but Ryan and Taryn for the most part seem better able to handle it all.

One of the differences in this book is that there is less time spent in Taryn’s bar, as she is more part of Ryan’s Hollywood life. I think it’s more interesting to have the couple together. There is less drama because there is less time spent apart, but there are still lots of stories to tell. And, I liked how the author brought Taryn’s friend Marie in the story, giving Taryn a confidante.

There is growth for the characters, individually and as a couple. Taryn has always been strong and independent, but has trust issues and some other family concerns to work out. We do get more insight into Ryan and Taryn’s family relationships, and there’s more development with their friends from the bar and other characters from the first book. There are several stories going on at once, but I think they all tie together pretty well.

I listened to the audiobook, and Madeleine Maby again knocks it out of the park with her narration. She is Taryn in my mind, and fits the character’s voice to a T. Her voice for Ryan is confident and sounds like a movie star, but not over the top. I could differentiate all the characters easily and I don’t think I would have enjoyed the story as much if I hadn’t listened to the audiobook.

This book is emotional and romantic, and I’m happy with the conclusion overall. A lot of my complaints about the first book’s pacing and angst level were addressed in the sequel, making for a much more pleasant reading experience. I finished the sequel in half the time of the first book because it flowed so much better.

The journey overall is satisfying and sweet, and makes for a cute valentine read. All of the loose ends are tied up in Love Unrehearsed for Ryan and Taryn. But, good news for Love series fans: a third book in the series is in the works!  Look for Mike and Marie’s story in Love Unguarded sometime in the future.

Book Cover Reveal: Out of Play by Nyrae Dawn and Jolene Perry