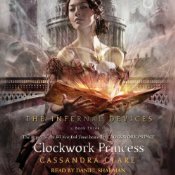 Writing about the end of a trilogy is always hard but this one seems especially daunting. Every adjective I want to use to express my feelings about Clockwork Princess I worry will come across as a spoiler. I’m a fan of the Mortal Instruments series and I must admit it took me a little while to warm up to this prequel series. I wasn’t receptive to the new characters and setting at first. But in the end the Infernal Devices series won my heart, and with the satisfying conclusion I may even prefer it to the original.

In Clockwork Princess the tension with the relationships, love triangle, and battle with the villain Mortmain comes to a head. The love triangle was particularly gut wrenching in Clockwork Prince so I didn’t know how much more I could stand! The journey in this book is surprising, passionate, and fulfilling, and the epilogue gave me chills. There’s not much more I could ask for in a series conclusion. I think the ending was perfect and very much in keeping with the tone of the series.

I’ve “read” this series exclusively via audiobook. In an unusual move, a different narrator reads each book of the trilogy. Clockwork Prince is the only book with dual narration, and I liked it, but I think my favorite is Daniel Sharman’s Clockwork Princess reading.

It’s funny because I was listening to the audiobook and liking it, but thinking it was moving a little slow at the beginning. But then I’d look down and see I was already at disc 6, at the halfway point. I savored every moment but had an uneasy feeling throughout, anticipating the inevitable heartbreak. I do think this series is ideally suited to audio format, and each of the narrators does bring the flavor of Victorian London to life.

This is the first book of the trilogy without a female narrator. Daniel Sharman has the task of conveying the voice of Tessa, as well as the other standout female characters. Plus he has to speak Mandarin and Welsh and use an American accent. I think he does an outstanding job with his accents, and with Will, Jem and the other male characters especially. The female characters also sound believable, such as Cecily, Charlotte and Sophie. The best complement I could give Sharman is at the end I didn’t notice the narration at all because I was so engrossed in the story.

I’m really pleased with the conclusion of this trilogy and I’ll miss these characters, so it’s a bittersweet ending for me. I’m looking forward to the City of Bones movie, and The Dark Artifices series to come. Kudos to Cassandra Clare on this amazing series!

If you want to check out Clockwork Princess on audio, be sure to enter my giveaway. It’s ending this weekend!

Have you read Clockwork Princess? What did you think of the conclusion?

Check out an interview with Cassandra Clare & Daniel Sharman discussing the audiobook below:

Other audiobook reviews in the series:
Clockwork Angel | Clockwork Prince