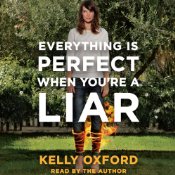 Book: Everything Is Perfect When You’re a Liar by Kelly Oxford, Harper Audio, April 2, 2013

A wunderkind producer of pirated stage productions for six-year-olds

Not the queen of the world

Capable of willing her eyesight to be 20/20

Totally an expert on strep throat

A certified therapy assistant who heals with Metallica mixtapes

“Not fat enough to be super snuggly.” —Bea, age four

“Bitingly funny. But everybody knows that.” —Roger Ebert

Sad that David Copperfield doesn’t own a falcon

I don’t know where I’ve been but I haven’t heard of Kelly Oxford until her book came out last week. Oxford is a comedic writer (she wrote a tv pilot and has a movie script in development) and a twitter celebrity. I saw a mention on twitter coincidentally by The Mindy Project (love!) stars about Oxford’s book. I was just wishing for a new humorous memoir à la Bossypants or Is Everyone Hanging Out Without Me, so I was thrilled to spend an audible credit on Oxford’s book. Oxford’s unfiltered sense of humor is entertaining to listen to and she’s gained a new twitter follower in me. She talks about growing up and working odd jobs and her adventures in parenting, so it’s all very relatable.

Kelly Oxford is from Canada and the book chronicles her life growing up in Calgary, before starting a family and later moving to Los Angeles. The book starts out with Oxford at age six, going through hoops to try to cast a stage adaptation of Star Wars. She later goes on a wild trip to Los Angeles to try to meet Leonardo DiCaprio and be his girlfriend before Titanic makes him a superstar. She also talks about peeing at a gas station while waiting in line to buy cigarettes, and her weekend trip to Vegas hosted by magician David Copperfield. Oxford is brutally honest in her observations and a fearless sharer of embarrassing moments.

Oxford is a good storyteller and I found all the essay’s absorbing. She does find the humor in everyday life, and even when she’s discussing a serious topic she gives it a light touch in keeping with the tone of the book. For instance, she talks about the worry that her husband will die and she won’t have a job to support herself, so she takes a job at a nursing home. Oxford actually had a few interesting jobs before doing the writing thing, like washing dishes at a German restaurant at age 12. My favorite stories were the Vegas trip and the family’s trip to Disneyland, but they all are pretty amusing.

Kelly Oxford reads the audiobook herself, something I always appreciate with memoirs. Who better than the author to read her own stories, right? Oxford speaks clearly and reads with an easy, conversational manner. I did speed up the narration a tad  (to 1.25x) with the audible app, and that was just perfect for me. Oxford brings her stories to life with her reading and this is an audiobook I didn’t want to stop listening to.

If you like humorous memoirs like those by Tina Fey, Jenny Lawson, or Mindy Kaling I think you’ll eat up this book. I hope there’s a part two someday.