The Princess in the Opal Mask is a new book from Jenny Lundquist and Running Press Kids. How pretty is that cover! If you like princesses, secret sisters, switched identities, and assassins, this may be the book for you. Read on to find out more about the book, check out a deleted scene, and enter to win a copy for yourself. 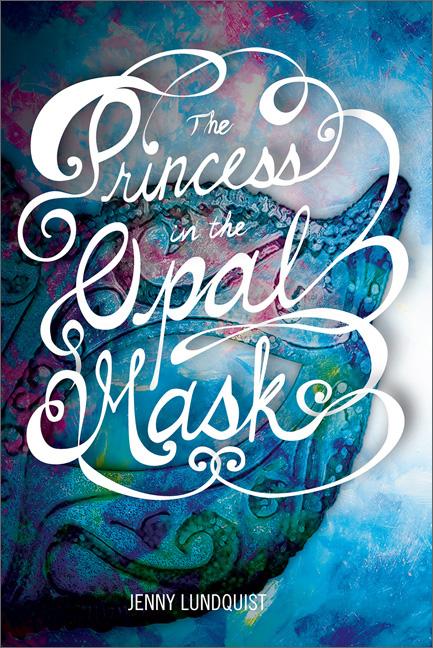 Orphaned as a child in the crumbling village of Tulan, Elara is determined to learn her true identity, even if it means wielding a dagger. Meanwhile, in Galandria’s royal capital, Princess Wilha stands out as someone to either worship or fear. Though no one knows why the king has always made her conceal her face–including Wilha herself.

When an assassination attempt threatens the peace of neighboring kingdoms, Elara and Wilha are brought face to face . . . with a chance at claiming new identities. However, with dark revelations now surfacing, both girls will need to decide if brighter futures are worth the binding risks.

The Princess in the Opal Mask is on sale now:

And now I’m thrilled to welcome author Jenny Lundquist to share a deleted scene from the book!

Thanks so much for having me today! In the beginning of The Princess in the Opal Mask, Elara mentions a night when Mistress Ogden locked her in the barn. I had initially written that scene as a flashback, then decided to behave myself and delete it (“Flashbacks are bad!” saith most editors.) Anyway, I’m super excited to share it with you guys today!

Some scars, like some memories, fade in time. The skin repairs, the mind forgets. Still others—scars and memories alike—remain just as red, and raw, and angry as the day the skin was pierced. So it is with the scar I carry from the night Mistress Ogden locked me in the barn:

It was a harsh winter that year, and Mr. Blackwell—the director of the Galandrian Royal Orphanage—had not come for dinner. His absence also meant the absence of the four hundred worthings he pays the Ogdens every quarter to house me. Though of course at the time I was too young to understand that. Back then, I was still very young, young enough to believe I was the Ogden’s daughter. A less-loved, harder-worked daughter than their beloved Serena, certainly. But a daughter, nevertheless. I believed too, that Mr. Blackwell was a rich uncle, merely popping by for a family dinner. I never thought to question then, why those dinners with him were the only nights Mistress allowed me to eat at the table with her, Serena and Mister Ogden.

I can still remember the three of us, me, Mistress, and Serena, dressed in pink party dresses, waiting at the table. Mister Ogden was upstairs sick. (I didn’t understand then, that sick and hung-over are two different things.) I swung my legs, and gazed adoringly up at Mistress Ogden. She always let me sit by her, and she never yelled at me or slapped me—not even once—on the nights when Mr. Blackwell came.

I remember my belly clenching, my heart racing. Even then, I understood his not coming was a bad sign. I wanted to make her feel better. I wanted to see her smile. For when she smiled—at Serena, never at me—something inside me lit up. I was too young then to understand that most of her smiles are fake—a pretty mask to conceal a cruel heart.

“Mama?” Her gaze was vacant; her voice bewildered. “Mama? Why do you call me mama?”

Across the table, Serena laughed, and my throat squeezed tight. A tear dripped down my cheek. I swallowed and wiped my eyes quickly, and hoped Mistress wouldn’t see. My tears always made her so angry.

Mistress Ogden seemed to come back to herself then. “I’m not your mama, you fool.” She rose, and yanked me from my seat. She dragged me outside, to the back of Ogden Manor. I was screaming; she was screaming. She said if Mr. Blackwell wasn’t coming, I might as well sleep in the barn with the other animals.

“But it’s too cold to sleep outside,” I protested. “One of the goats froze to death last week.” I tried to wiggle from her grasp. “Mama, stop!”

“You’re no child of mine,” she said, stopping in front of the barn. “A dirty orphan is all you are. You’re no one. Nothing. You’re nameless, did you know that?” Her voice was harsh, merciless. “The orphanage had no record of your name. They told me to choose another name for you, and I picked Elara, after a girl from my childhood village. Dirtiest, most worthless brat I’ve ever known.” Her eyes flashed. “Just like you.”

She threw me into the barn. I landed on top of a pitch fork, and it tore into my flesh. I remember the searing pain, the sticky sweetness of blood flowing down my arm.

I jumped up, ripping more flesh from my shoulder. “Mama! Mama, please! I promise I’ll be good.” I screamed for her, for the beautiful blonde I had always believed was my mother. I screamed and pounded until my knuckles cracked and bled. But she never came.

Exhausted and shivering, I wrapped myself in discarded blankets smelling of dirt and dung. I listened to the horses stamping, and stared up at a hole in the roof, up at the stars, and hoped I’d live to see the morning.

But something changed that night. Something that once was soft had hardened. It was not just my shoulder that scarred that day, but my heart. I rubbed at my shoulder and hoped it would heal properly. But even then, I knew the night would leave its mark.

Thanks so much for sharing that bonus deleted scene with us today, Jenny. That was an emotional scene- Mistress is way harsh!

The Giveaway has ended!

Congrats to Bailee who won a paperback copy of The Princess in the Opal Mask.