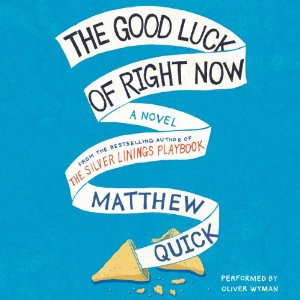 Matthew Quick’s latest book, The Good Luck of Right Now, is a coming of age about a man learning to live on his own after his mother’s death. Bartholomew is pushing 40 but has missed a lot of social milestones, like making friends, having a drink with a girl at a bar, or getting a job. He’s working on his personal growth strategy by writing letters to Richard Gere, an actor his mother admired.

Like Quick’s other books, The Good Luck of Right Now is offbeat and filled with quirky characters, with a focus on mental health, religion, and personal discovery. It’s happy, sad, heartwarming, strange, and very entertaining.

Bartholomew Neil’s story plays out through his letters to Richard Gere. He spends his time going to church, talking with family friend, the recently “defrocked” Father McNamee, and studying up on Buddhism at the library. His crush on the “Girlbrarian” is another reason that Bartholomew needs a lot of study time.

Bartholomew also has an angry voice inside of him that eats at him and he has a lot to work through. Bartholomew’s grief counselor wants him to work on his self-improvement goals, and to be more independent. He meets a kindred spirit at a support group. Max is grieving his beloved cat, and his Tourette’s means the f-word appears almost every other word in his scenes. In what Bartholomew would call synchronicity, it turns out Max is the girlbrarian’s brother.

The action shifts from Philadelphia to Canada when the group of misfits leave town on an important cat/dad finding mission.

The title plays very much into the philosophy of the story, and refers to the flip side of bad luck. Bad, terrible things occur to the characters in the book, and Bartholomew’s mother taught him to put a positive spin on bad luck. Maybe their bad luck means someone else will have good fortune. It’s a theme that comes up time and again.

I listened to the audiobook, performed by Oliver Wyman. Wyman does an outstanding job with the narration, and really inhabits the characters. His Bartholomew is kind and sincere, but Wyman also brings that angry voice to life as well. I also really enjoyed his voice for the cat obsessed, foul-mouthed Max. The book is so cinematic in feel like Quick’s Silver Linings Playbook and benefits from Wyman’s skilled narration.

Though this book is written with an adult audience in mind, I think that it definitely has YA appeal, with its unconventional coming of age story. I really liked this offbeat story, and since there is a movie in the works, I’m already trying to cast it in my head. I hope Richard Gere makes a cameo at least! If you like quirky, heartwarming books about road trips, mental illness, and self-discovery, or Matthew Quick’s other books, this one might be right up your alley.