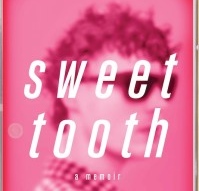 Sweet Tooth is an entertaining coming of age memoir from Tim Anderson, author of Tune in Tokyo.  At age fifteen Tim realizes he’s attracted to boys, and around the same time he finds out he has Type-1 diabetes.  He has to deal with coming out in a difficult time in history, and managing his blood sugar level, no easy feat for a sugar addict. Laughter is the best medicine, and Tim Anderson’s engaging memoir has a breezy, humorous tone.  Plus, 80s music fans will enjoy the righteous music references.

What’s a sweets-loving young boy growing up gay in North Carolina in the eighties supposed to think when he’s diagnosed with type 1 diabetes? That God is punishing him, naturally.

Sweet Tooth is Tim Anderson’s uproarious memoir of life after his hormones and blood sugar both went berserk at the age of fifteen. With Morrissey and The Smiths as the soundtrack, Anderson self-deprecatingly recalls love affairs with vests and donuts, first crushes, coming out, and inaugural trips to gay bars. What emerges is the story of a young man trying to build a future that won’t involve crippling loneliness or losing a foot to his disease—and maybe even one that, no matter how unpredictable, can still be pretty sweet.

I didn’t really know a lot about living with diabetes before reading this book, and so I found it really informative. Tim struggles with his new diet (I can not emphasize enough how much he truly loves sugar) and he has some scary diabetic episodes. I can relate to food restrictions- I’m allergic to milk so I’m constantly checking food labels and asking lots of questions when dining out. Having diabetes involves frequent blood tests, doctor’s visits, and insulin shots and anyone managing their own health concerns will relate to Tim’s struggles. Since Tim talks about his disease with humor, hopefully he won’t mind if I share a gif of Chris Traeger (Parks & Rec) filming his “Diabetes!” PSA.

Tim’s story has its ups and down, and I can relate to the way he turns to music to get through the tough times. Tim’s a fan of shoegaze and postpunk bands as you can see in his book playlist, Sweet Tooth Jukebox:

Be sure to check out Sweet Tooth if you enjoy humorous memoirs. Though the subject matter is serious, the tone is comedic and this is a fast and funny read.

Congrats to Lysette won won a copy of Sweet Tooth!