We Are Called to Rise is author Laura McBride’s debut novel. It’s set in Off-Strip Las Vegas and is the story of four individuals brought together by one traumatic event. Pack this book in your beach bag- it has a plot that pulls you in right away, engaging characters, and a strong setting that’s a standout character itself. 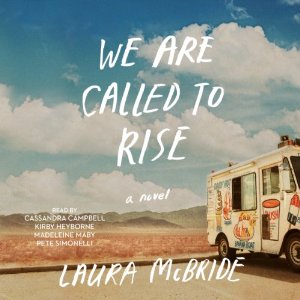 Author Laura McBride introduces the book and talks about the inspiration for the story (no spoilers!)

We are Called To Rise is about four ordinary characters living in Las Vegas: Avis is 53 and worried about her son’s mental health after three turns in Iraq, Bashkim is an 8-year-old son of ice cream truck owning Albanian parents, Luis is recovering from a difficult stint in the military and exchanges letters with Bashkim through a school program, and Roberta is a social worker who wants to make a difference in people’s lives. Their stories intersect in different ways through one life-changing event.

Each voice in the novel is a unique and interesting piece of the puzzle. Any of the characters could probably warrant a standalone book, and I was especially drawn to Bashkim and Luis’s stories. You might worry about relating to 8-year-old Bashkim, but he is an old soul and his voice is authentic, but also wise beyond his years. Luis’s PTSD story is really intriguing too- I wanted to learn more about him.

We follow these characters through their moral dilemmas, when doing the right thing is messy and complicated. The PTSD theme is topical and also done well, as returning soldiers struggle to find their place at home and to stop fighting. One of Bashkim’s teachers compares the look of Nevada to Iraq, which may be another part of the challenge for returning soldiers.

I listened to the audiobook, and I’m so glad it is full-cast to match the four pov’s in the book! Cassandra Campbell conveys Avis’s despair and weariness, and Kirby Heyborne breaks your heart with his portrayal of Bashkim. Pete Simonelli’s performance of Luis is straightforward and steady like his previous audiobooks, and appropriately shrouded in sorrow. Madeleine Maby’s Roberta is caring and professional – this character has the least to work with, but Maby competently handles the role. I went into this audiobook blind- not knowing about the event that links the characters, and it’s a book that kept me thinking even when I wasn’t listening. The full-cast audiobook enhances the story and intensifies the emotional tone.

Check out an audio excerpt of We are Called to Rise – this sample features Madeleine Maby’s character Roberta, the social worker:

This story has a lot of emotion and heart, and though the book gets tense and gripping, it is hopeful as well.