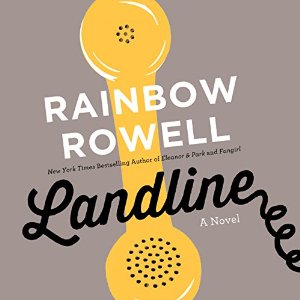 From the New York Times best-selling author of Eleanor & Park and Fangirl, comes a hilarious, heart-wrenching take on love, marriage, and magic phones.
Georgie McCool knows her marriage is in trouble. That it’s been in trouble for a long time. She still loves her husband, Neal, and Neal still loves her, deeply - but that almost seems beside the point now. Maybe that was always beside the point. Two days before they’re supposed to visit Neal’s family in Omaha for Christmas, Georgie tells Neal that she can’t go. She’s a TV writer, and something’s come up on her show; she has to stay in Los Angeles. She knows that Neal will be upset with her - Neal is always a little upset with Georgie - but she doesn’t expect to him to pack up the kids and go without her. When her husband and the kids leave for the airport, Georgie wonders if she’s finally done it. If she’s ruined everything. That night, Georgie discovers a way to communicate with Neal in the past. It’s not time travel, not exactly, but she feels like she’s been given an opportunity to fix her marriage before it starts. Is that what she’s supposed to do?

Your new favorite Rainbow Rowell book is on sale today! With Landline, Rowell is back with another book for adult readers, her first since Attachments. This book is about a marriage in trouble. Can it be saved with a phone call to the past? A little time travel hocus-pocus could make this couple remember what brought them together in the first place. Or it could just be the final nail in the coffin of their relationship.

Landline features a unique look at first love, the cold slap of reality, and pop culture nostalgia with the “time travel” element. This is probably the book of Rowell’s that’s most relatable for me, and I can so picture it as a Christmas-themed romantic comedy. I would buy a ticket right now.

In Landline, Hollywood TV writer Georgie McCool is missing Christmas with her husband Neal and two daughters due to a work deadline. To be fair, this work deadline is for the big break she has been working toward – her dream project. But Neal has had enough and takes the girls as planned to his mother’s home in Omaha, Nebraska, but without Georgie. Georgie can’t focus on writing scripts though- she feels lost without Neal and the kids. She calls and calls but can’t get him on the phone. Until, she calls him using her old landline phone in her mother’s house. But the Neal she talks to is not Neal of the present; it’s Neal of the past, from when they last spent a Christmas apart when they were dating. Will reconnecting in the past help patch up the future?

I’ve been married forever, well, longer than Georgie and Neal anyway, and a lot of what these two are going through rings true to me. This story is about the nuts and bolts of a relationship after the HEA – the good, the bad, and the ugly. The tone is a little melancholy since Georgie and Neal are in such a precarious place. You wonder if maybe they are just too different to make it. But the time travel element give you a little reprieve and allows you to root for a HEA 2.0.

This book takes place in the years 2013 and 1998. If you’ve read Rowell’s other books you know she is fond of pop culture references, with the 80s setting of Eleanor & Park, and the Y2K setting of Attachments. I get her references so that is all cool with me, and this book namechecks the Crayola caddy, Snoopy Sno-Cone machine, 80s sitcoms, Harry Potter, and many others. Rowell also mentions movies and TV shows that feature time travel to compare her situation like Back to the Future, Somewhere in Time, and LOST. The movie that seemed most similar to me though when I was reading this was Peggy Sue Got Married, about a woman who sees her ex-husband at a high school reunion and has the chance at a do-over.

Landline is a painful read at times as you can really feel Georgie’s despair over the fact that she may be losing her husband. Can love overcome all the stresses of a marriage? I recognized a lot of the guilt over marriage/kids/work/life/ balance and to complicate things Georgie’s work partner is almost a third party in the marriage. Rainbow Rowell is good at twisting the knife and making you feel all the emotions in her writing. This story made me think long after I’d finished reading it.

Rebecca Lowman and Rainbow Rowell team up once again with the Landline audiobook, their third collaboration. I like Rebecca Lowman’s performance and think she’s a great fit for Rowell’s books in general. I’ve purchased other books she’s narrated that I otherwise wouldn’t have. She let’s the story take the lead and doesn’t distract with her performance. Lowman reads with a slower pace, which is usually a frustration for me with other books but for some reason it works with Rowell’s books. That said, I listened to this book twice and the second time sped it up to 2x speed and it still sounds great! Lowman makes each voice distinct, from Georgie’s kids, her guy friends, and parents, and I especially liked her voice for Neal. He sounds just how he’s described. If you liked Lowman’s narration in Eleanor & Park or Fangirl you’ll likely be pleased with the Landline audiobook. Take a listen:

Read Landline if you like: Rainbow Rowell’s other books, especially Attachments and Eleanor & Park, and if you are a fan of romantic comedies/dramedies.

Catching up with Outlander
Audiobook Giveaway: CARRY ON by Rainbow Rowell (Signed!)