London Falling is the sequel to I See London, and book two of the International School series. This series features romance, international travel, diversity, friendship and family drama, and has a college setting. Chanel Cleeton is a fresh new voice in New Adult and her books are addictive summer reads.

London Falling works okay as a standalone, though I’d recommend starting with the first book, I See London, to get the whole backstory. The romance has a bigger payoff that way. 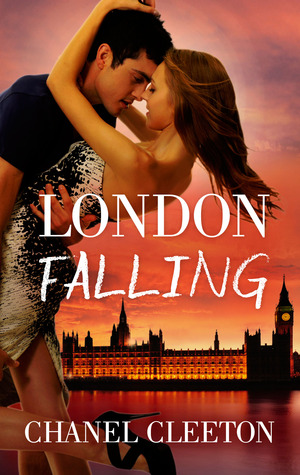 What’s the Story: American student Maggie is studying at the International School in London. She falls in with a wealthy gang of fellow students, including school playboy Samir. Maggie and Samir have chemistry but obstacles stand in their way of romance. Plus, he’s planning to graduate soon and follow in his father’s footsteps in politics in Lebanon. Maggie comes from more humble origins, while Samir has the world at his fingertips, even though he doesn’t necessarily want to play the role he was born into. These two have just have one year together before they go their separate ways- will they be able to say goodbye after graduation?

Two Hearts Beat as One: London Falling is Samir’s as well as Maggie’s story –both have family baggage, and this book benefits with dual pov. It’s interesting to get Samir’s side of the story in this installment, since the first book was all about Maggie’s impressions of him. Maggie is scared of getting hurt by Samir, and knows that the odds are against them. But it’s a surprise to learn that Samir is just as insecure about their relationship and fears losing her.

Big Jet Plane: Are you traveling to any exotic locales this summer? Me, not so much. So it’s fun to travel vicariously through this book, especially since Maggie and her friends really know how to live it up. Just like in I See London, expect some fun side trips.

I enjoyed this book even more than I See London. I liked the focus on Samir and Maggie, and their struggles together and apart. Things were not always easy but the drama never felt manufactured. The romance is the focus of the book, but there were other stories at play as well that kept the book balanced.

The ending satisfies, but I wouldn’t mind seeing these characters again. I know Chanel Cleeton has another new series (Flirting with Scandal in 2015) lined up after this book, but I hope she doesn’t leave us hanging with Maggie’s friend Fleur. I’d love to see her get her own book!

Stop by next week for my stop on the London Falling blog tour for a Top Ten List and your chance to win some cool prizes.

London Falling is on sale now, and both books in the series are on sale for $2.51 at the moment.