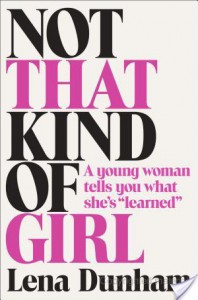 For readers of Nora Ephron, Tina Fey, and David Sedaris, this hilarious, poignant, and extremely frank collection of personal essays confirms Lena Dunham—the acclaimed creator, producer, and star of HBO’s Girls—as one of the brightest and most original writers working today.

“If I can take what I’ve learned in this life and make one treacherous relationship or degrading job easier for you, perhaps even prevent you from becoming temporarily vegan, then every misstep of mine will have been worthwhile. This book contains stories about wonderful nights with terrible boys and terrible days with wonderful friends, about ambition and the two existential crises I had before the age of twenty. About fashion and its many discontents. About publicly sharing your body, having to prove yourself in a meeting full of fifty-year-old men, and the health fears (tinnitus, lamp dust, infertility) that keep me up at night. I’m already predicting my future shame at thinking I had anything to offer you with this book,  but also my future glory in having stopped you from trying an expensive juice cleanse or having the kind of sexual encounter where you keep your sneakers on. No, I am not a sexpert, a psychologist, or a registered dietician. I am not a married mother of three or the owner of a successful hosiery franchise. But I am a girl with a keen interest in self-actualization, sending hopeful dispatches from the front lines of that struggle.”

By total coincidence this turned into non-fiction week here on the blog! This is my fourth non-fiction review of the week- how unusual for me! I would say don’t get too used to it, but I still want to read Bad Feminist and Yes Please so I guess this trend will continue for a bit.

I loved some recent humorous memoirs from Mindy Kaling, Tina Fey, and Jenny Lawson, and had high hopes for Lena Dunham’s memoir. I’ve only seen a few episodes of Girls to be honest, but “voice of a generation” Dunham always seemed funny and quirky to me and I was interested in seeing what she had to say.

Not That Kind of Girl was not the haha funny type of book that I’d expected and has a more tragicomic vibe. (Maybe if I’d done my homework with Girls first, I would have been better prepared) The essays on body image, mental health and sex are thoughtful and sharply written, but I think overall I went into the book with the wrong impression. And maybe since I’m not in my twenties anymore this book didn’t really speak to me.

The title (and I guess the retro cover art) is a nod to Helen Gurley Brown’s Having it All (did you know she coined the term?), a book Dunham picked up second hand for sixty-five cents as a “kitschy trophy.” Though she thinks most of the advice is “absolutely bananas” she appreciates “the way Helen shares her own embarrassing, acne-ridden history in an attempt to say Look, happiness and satisfaction can happen to anyone.” In Not that Kind of Girl Dunham sets out to help readers learn from her mistakes: “And if I could take what I’ve learned and make one menial job easier for you, or prevent you from having the kind of sex where you feel you must keep your sneakers on in case you want to run away during the act, then every misstep of mine was worthwhile.”

Not that Kind of Girl is divided into five sections: Love & Sex, Body, Friendship, Work, and Big Picture. The sections include essays, top ten lists, and food logs on each topic. Dunham comes off as honest, and her humor is self-deprecating. I was interested in her recounting her OCD and anxiety, and her essays on body issues and vegan diet (though the food logs were too much) However, I felt the book started to lose steam in the second half.

I borrowed the audiobook of Not that Kind of Girl from the library, and the author performs the book. I’d be disappointed if Dunham didn’t perform the audiobook, since it’s her story- who better to bring it to life? The audio is maybe not the best way to experience the book though. Since the book includes lists and illustrations, I think the print book might serve the material better. Plus, listening to the food logs just goes on and on. Dunham’s voice adds an authenticity to the story though and plays up the awkwardness of her stories.

Big fans of Dunham and Girls and twenty-somethings are probably the best audience for this book. I think we were mismatched though I’m ultimately glad I took a chance on this book.

Listen to a sample of the audiobook:

Tomboy by Liz Prince Review and Giveaway
Blog Tour: The One That Got Away by Bethany Chase

One thought on “Not That Kind of Girl by Lena Dunham”