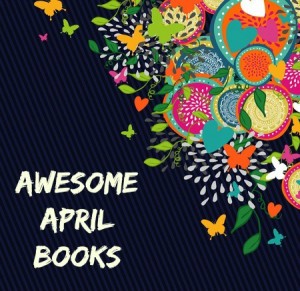 Whoa, March is just sailing by! I’ve had a little reading/reviewing slump this month but I’m trying to fit in a few more books before March ends. And there are some amazing looking books hitting shelves this April! Here are the ones that caught my eye:

Simon vs. the Homo Sapiens Agenda by Becky Albertalli – April 7, Balzer + Bray. My teenager read this ARC first and had a lot to say about it so I’m more curious to read it. Plus we’re reading it for YA Diversity Book Club.

None of the Above by I.W. Gregorio – April 7, Balzer + Bray. This book is about an intersex teen and promises to be an informative and emotional read. I’ll be talking about this book next week for a blog tour feature.

Kissing Ted Callahan (And Other Guys) by Amy Spalding – April 7, Poppy. I like all of Amy’s books and I like what I’ve read so far of this one!

All the Rage by Courtney Summers –  April 14, St. Martin’s Griffin. This book deals with rape culture and bullying and sounds like a powerful and important read. I’ll be featuring this book later this month with a review and author Q&A.

Sophomore Year is Greek to Me by Meredith Zeitlin – April 21, Putnam. Zeitlin’s Freshman Year & Other Unnatural Disasters is hilarious and this follow up sounds quite funny as well.

Things We Know by Heart by Jessi Kirby – April 21, HarperTeen. A heartbroken girl tracks down the boy who received her boyfriend’s heart. I’m a fan of this author and can’t wait to read this one.

99 Days by Katie Cotugno – This one is about a very uncomfortable love triangle and the early reviews say it’s a difficult but addictive read. I didn’t love How to Love as much as my other blogger friends but I really want to give this book a try.

An Ember in the Ashes by Sabaa Tahir – April 28, Razorbill. This is another YA Diversity Book Club pick, and our first in the fantasy category. This one is getting a lot of good buzz.

The Girl at Midnight by Melissa Grey – April 28, Delacorte.  I don’t read a lot of fantasy but I’m interested in giving this one a shot, especially with the Daughter of Smoke and Bone comparisons.

French Coast by Anita Hughes – April 7, St. Martin’s Griffin. My teen is in France now but at least I can travel there too through books. This is about a Vogue editor who travels to France for a dream assignment and gets more than she bargained for.

Where They Found Her by Kimberly McCreight – April 14, Harper. I liked Reconstructing Amelia and I’m interested in reading more from this author. It’s about the mystery surrounding a baby’s death.

The Dark Space by Mary Ann Rivers and Ruthie Knox – April 15, Brain Mill Press. I love these authors so I had to preorder their first collaboration. I’ve read the first few chapters and can’t wait to read more. It’s about two college students who meet in Contact Improv class, aka the Make-out Class.

Asa by Jay Crownover – April 21, Harper Collins. This is the final book in the Marked Men series. I’m just starting book #5 Rowdy so I should be all caught up for Asa. (In the audiobooks the narrators pronounce Asa many different ways- but the author confirms it is pronounced Ace-ah)

Rules of Seduction by Jenna Mullins – April 21, The Studio/Paper Lantern Lit. A college grad heads to LA to work on a vampire TV show and gets in over her head in the romance department. Sounds fun!

Sweet by Tammara Webber – April 27, self-published. This is a companion / spinoff book in the Contours of the Heart series featuring secondary characters from Breakable. Very curious about this one.

Black Iris by Leah Raeder – April 28, Atria Books. I liked Unteachable by this author and this book sounds even more dark, edgy and badass.

Broken Juliet by Leisa Rayven –  April 28, St. Martin’s Griffin. The conclusion to the Starcrossed duology! Bad Romeo was very entertaining so I look forward to reading more of the story.

So, what are you looking forward to reading in April?