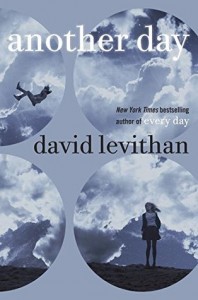 In this enthralling companion to his New York Times bestseller Every Day, David Levithan tells Rhiannon’s side of the story as she seeks to discover the truth about love and how it can change you.

Every day is the same for Rhiannon. She has accepted her life, convinced herself that she deserves her distant, temperamental boyfriend, Justin, even established guidelines by which to live: Don’t be too needy. Avoid upsetting him. Never get your hopes up.

Until the morning everything changes. Justin seems to see her, to want to be with her for the first time, and they share a perfect day—a perfect day Justin doesn’t remember the next morning. Confused, depressed, and desperate for another day as great as that one, Rhiannon starts questioning everything. Then, one day, a stranger tells her that the Justin she spent that day with, the one who made her feel like a real person . . . wasn’t Justin at all.

In Another Day, Rhiannon learns to not judge a book by its cover when she falls for A, someone who wakes up in a different body every day.

When I first heard that there would be a companion book to Every Day I was thrilled yet skeptical. I thought Every Day was a nearly perfect book on its own, and though I wondered what would happen next in a sequel I was fine with leaving the story as is.

In an author’s note, David Levithan calls Another Day a “twin” of Every Day. It’s not a sequel, but tells a similar story but from a different perspective. One of the reasons I loved Every Day so much is because of A, the genderless teen that wakes up every day in a new body. Another Day shows us A from another side, from the point of view of Rhiannon, the girl A fell for when they inhabited her boyfriend’s body. The body hopping aspect is a little sci-fi but the story is contemporary in feel and touches on issues of gender, diversity, self-worth, and love.

Rhiannon’s boyfriend Justin is not the greatest, and even her friends think she could do so much better. But one day, Justin is a model boyfriend and they spend a blissful day together on the beach. The next day however, Justin is back to his normal self. It turns out Justin was not himself that day and was inhabited by body drifter A.

A inhabits different bodies all the time but this is the first time they have fallen for someone in one of their borrowed lives. (Since A is genderqueer I am using “they” pronouns to refer to A) When A reveals themself to Rhiannon will she believe their story and can she accept their unusual lifestyle?

If you’ve read Every Day this story is familiar to you. I purposely did not re-read Every Day so that I could read Another Day through fresh eyes and I think that was a good idea. I think you can read these books out of order though, and I’d recommend them both.

This book helped me to understand Rhiannon’s side better and it was interesting to see her reactions to A and the different bodies they inhabited. Loving A allows Rhiannon to look beyond appearances and appreciate the person inside.

If you were frustrated about the ending of Every Day I can’t say you’ll get better closure here. Perhaps there’s a third book on the way to tie up loose ends? I enjoyed revisiting these characters but am okay with leaving this series as a duet. I do definitely want to read more books about non-binary characters though- I found this list on Goodreads with some suggested books if you’re interested too.