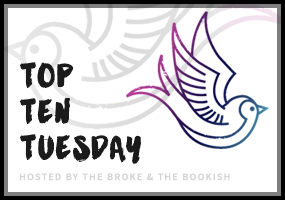 Top Ten Tuesday is an original feature from The Broke and the Bookish. This week we are talking about book series we haven’t finished yet. I don’t read a lot of series books because I do find it hard to keep up with them. I participated in this topic in 2012 and looking at that list I never did catch up with any of those unfinished series books so I don’t have high hopes about catching up with these either. I should really just stick to standalone novels!

The first series I thought of for this topic is Outlander since I seem to be stalled at book four. But I read the author is still writing book nine so maybe I’ll catch up before the end.

All of these are 2013-2015 complete series books that I liked at the beginning but for some reason I haven’t followed up with them.

These series are complete but I am not up to date:

The Shatter Me series by Tahereh Mafi – I liked Shatter Me but just didn’t keep up.

The Dust Lands trilogy by Moira Young – I loved Blood Red Road but I think I just got burnt out on dystopia.

The All Souls trilogy by Deborah Harkness – The series started off great for me but I couldn’t get into book two.

The Mortal Instruments series by Cassandra Clare – I am two books behind in this series and just think I’ve lost the momentum to continue. I’ll check out the TV series though!

The Fire and Thorns series by Rae Carson – The series started off strong so I’m not sure why I didn’t follow through. And now Carson has a new series!

The Lux series by Jennifer L. Armentrout – I liked the first two books but just didn’t keep up with the series.

The Marked Men series by Jay Crownover – I read books 1-4 this year but haven’t read the last two books. I like the series but think I just needed to move on to something else.

The Nevermore trilogy by Kelly Creagh – I liked Nevermore but I think I just lost momentum with this series. But hey maybe I’ll pick up this Edgar Allen Poe themed series again this Halloween.

The Burn for Burn series by Jenny Han and Siobhan Vivian – I liked the first book okay but didn’t feel strongly enough to continue.

The Daughter of Smoke & Bone series by Laini Taylor – I rated the first book five stars but just couldn’t get into the next book.

Have you finished any of these series? Which one should I pick up again?