I’m so excited to kick off the Falling into Bed with a Duke blog tour! This book is the first in a new series called The Hellions of Havisham and it goes on sale tomorrow, October 27. I’ve been wanting to read more romance titles and this one sounds delicious. Author Lorraine Heath stops by today to tell us why readers will swoon for this new series. Read on to find out more about the book and don’t forget to enter an amazing giveaway!

About Falling Into Bed With a Duke: 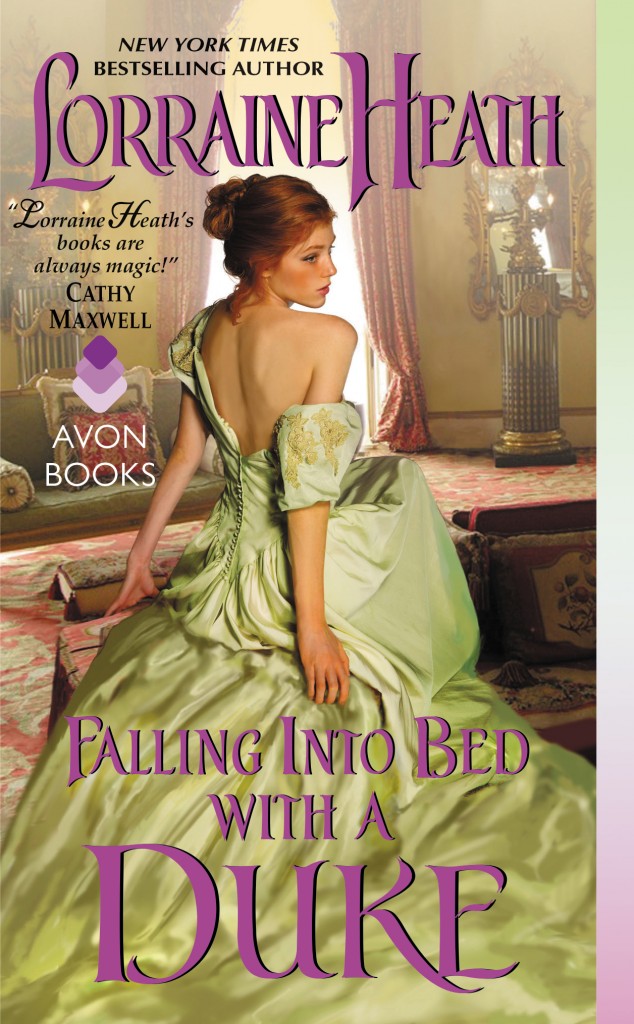 After six unsuccessful Seasons, Miss Minerva Dodger chooses spinsterhood over fortune-hungry suitors. But thanks to the Nightingale Club, she can at least enjoy one night of pleasure. At that notorious establishment, ladies don masks before choosing a lover. The sinfully handsome Duke of Ashebury is more than willing to satisfy the secretive lady’s desires-and draws Minerva into an exquisite, increasingly intimate affair.

A man of remarkable talents, Ashe soon deduces that his bedmate is the unconventional Miss Dodger. Intrigued by her wit and daring, he sets out to woo her in earnest. Yet Minerva refuses to trust him. How to court a woman he has already thoroughly seduced? And how to prove that the passion unleashed in darkness is only the beginning of a lifetime’s pleasure…?

Falling into Bed with a Duke by Lorraine Heath

Please welcome author Lorraine Heath who is here to tell us all about the world of the Hellions of Havisham series.

The Hellions of Havisham series introduces three charming rakes who are the darlings of London, easily forgiven for their transgressions because they have such tragic pasts.

I’ve always been fascinated by the fact that there were so many railway accidents when railroads were first used for transportation. So I have two couples—the Duke and Duchess of Ashebury and the Earl and Countess of Greyling—who are killed in a horrific railway accident. Their young sons become the wards of the Marquess of Marsden, who has a son—Viscount Locksley. The boys range in age from 6 – 8 when the series opens. What no one realizes at the time is that Marsden is quite mad. He lost his grip on reality when his wife died during childbirth. The clocks were all stopped at the moment of her death. And very little in the residence has been touched since she died. Very Miss Havisham-ish from Great Expectations, which is the reason I gave a nod to her when naming the marquess’s estate.

Havisham Hall is in Devonshire, near Dartmoor, isolated with little more than the screeching winds howling around it. The marquess has only three servants. He’s not cruel or mean. He’s simply very absent, roaming the hallways, searching for his wife’s ghost.

So the lads are very much left to their own devices. They run wild over the moors; they explore everything. Knowing how unexpectedly death can come, they are determined to make the most of whatever time they have. They become adventurers, they travel the world. They want to experience everything there is to experience. All of London, in particular the ladies, are fascinated by them.

Parties are held in their honor so they can rhapsodize about their travels. The Duke of Ashebury is an amateur photographer so people are interested in his photos. Edward Alcott, twin brother to the Earl of Greyling, loves to weave a good tale and can keep an audience enthralled as he waxes on about their adventures. Viscount Locksley is a mystery, part of the group but seldom staying in London long enough to give much attention to anyone in particular. He has taken on the mantle of overseeing Havisham, as his father has slipped farther from reality.

Then we circle back to their tragic histories. They’ve all grown up without a mother’s love; without a father’s as well. Yet knowing that love was the reason for Marsden’s madness, they have no interest in claiming it for themselves. Better to keep one’s distance from any entanglements. They adore women, but commitment is not for them. Although many a mama certainly wouldn’t mind if her daughter snagged their attentions, because again, in spite of their roguish ways, they are admired by the aristocracy for their adventuresome spirits and their daring exploits.

But Ashe, Edward, and Locke will each discover that all their traveling did nothing to prepare them for the adventure of falling in love.

Intrigued? Check out an excerpt from the book:

The Duke of Ashebury was on the hunt for a pair of long, shapely legs. Standing casually with a shoulder pressed to a wall in the front parlor of the Nightingale Club, he observed with a jaundiced eye those who entered. The ladies wore flowing silk that caressed their skin as a lover might before the night was done. The shimmering fabric seductively outlined the body, hinted at dips and swells. Arms were bared. Necklines were low, the silk gathering just below a tasteful showing of cleavage designed to entice. People murmured and sipped their champagne, while exchanging heavy-lidded gazes and come-hither smiles.

The flirtation that occurred within these walls was very different from that found in a ballroom. No one here was searching for a dance partner. Rather, they wanted a bedding partner. He appreciated the honesty on display, which was the reason that he often stopped by when he was in London. No pretense, no ruses, no duplicity.

He had already claimed a bedchamber, the key nestled in his jacket pocket, as he wanted no one to disturb what he had so painstakingly set up. His needs were unique, and he knew that within these walls, they would be kept secret. People did not discuss what occurred at the Nightingale Club. For most of London, its existence was something spoken about in longing whispers by those who knew it only as myth. But for those familiar with it, it served as a sanctuary, liberator, confidant. It was whatever one needed it to be.

For him, it was salvation, bringing him back from the brink of darkness. Twenty years had gone by since his parents’ deaths, yet still he dreamed of mangled and charred remains. Still, he heard his mother’s terrorized screams and his father’s fruitless cries. Still, his behavior when he’d last seen them taunted him. Had he known that he’d never look upon them again—

With resolve, he shook off the haunting musings that sent a chill down his spine. Here, he could forget, at least for a few hours. Here, the regrets didn’t gnaw unmercifully at him. Here, he could become lost striving for perfection, for the ultimate in pleasure.

He had merely to determine which lady would best suit his purposes, which would be willing to concede to his unusual request without protest. It bothered him not at all that the ladies wore domino masks. He cared little for their faces, understood their need for anonymity. Their concealment worked to his advantage as he’d discovered that ladies were more comfortable with his request when they were assured it would remain their secret—and his not knowing their identity made them bolder than they might have been otherwise. They liked being a little naughty as long as they weren’t caught. He couldn’t catch them if he didn’t know who they were.

Still, he had one cardinal rule he always observed: never the same lady twice.

The ladies brought their own masks, seldom changed them, as the façade became their calling cards, as effective at identifying them as the ones handed over to butlers in the early afternoon when they were making proper visits. The woman in the black mask decorated with peacock feathers had a scar just above her left knee from a tumble she’d taken from a pony as a child. The blue mask, black feathers had two delightful dimples in the small of her back. The green mask outlined in yellow lace possessed bony hips that had proven a challenge, but he’d been pleased with the results when their time together was finished. But then he’d always embraced the challenge of discovering the perfection in imperfection.

The three glasses of scotch that he’d enjoyed were thrumming through his veins. The din of intimacy was calming. The muscles that had been so tense earlier were relaxed. He was in his element here, or he would be in short order. As soon as he found that for which he was searching. He wouldn’t settle for less than what he wanted; he never did. If one sure thing could be said about the Duke of Ashebury, it was that he knew his own mind. That he was stubborn when it came to acquiring what he needed—or wanted. Tonight’s endeavors straddled the line of both what he needed and what he wanted. All needs would be met before dawn. Then, perhaps, he could be glad to be back in London.

Lifting his glass for another sip, he watched a woman wearing draping white silk and a white mask with short white feathers walk hesitantly into the room as though she expected the floor to drop out from beneath her at any moment. She wasn’t particularly tall, but based on the way the silk moved over her flesh with each graceful step, it was obvious that she possessed long, slender legs. He wondered if she was meeting someone, already had an arranged assignation. Some ladies did—it was one of the reasons that the men didn’t wear masks. So they were easily identifiable if their paramours wanted to meet them here. Another reason was that men simply didn’t bloody well care if anyone knew that they were in the mood for a good tupping. Even the married ones were brazen with their presence.

The woman in white appeared to have dark hair, gathered up in an elaborate style that no doubt required an abundance of pins. He couldn’t be absolutely certain of the exact shade because the lighting in the room—only flickering candles—enhanced the mood of secrecy as well as creating an ambiance for intimacy while providing a gossamer disguise for some distinguishing characteristics that were easily identifiable by color: hair, eyes, even the fairness of skin. Perhaps she moved slowly because her eyes were adjusting to the dimness. Gentlemen not yet spoken for did not swarm to her side. But then that was the rule here. Seduction happened slowly. Ladies needed to hint at an interest.

But then, if this was her first time, she might not be aware of the subtle rules. He was fairly certain he’d never seen her before. A connoisseur of the body, he would have remembered the elegance of her movements, the way the cloth glided over her skin, outlining her form. Slender legs, but meat where it counted. No bony hips there.

With one long swallow, he finished off his scotch, relishing the realization that the hunt was over. He’d thought he wanted a tall woman. He’d been mistaken.

2 thoughts on “Blog Tour: Falling Into Bed With a Duke by Lorraine Heath | Guest Post & Giveaway”