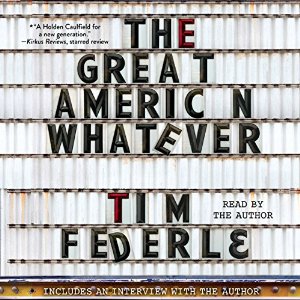 From the award-winning and New York Times best-selling author of Five, Six, Seven, Nate! and Better Nate than Ever comes a laugh-out-loud, sad YA debut that's a wry and winning testament to the power of old movies and new memories - one unscripted moment at a time.
Quinn Roberts is a 16-year-old smart aleck and Hollywood hopeful whose only worry used to be writing convincing dialogue for the movies he made with his sister, Annabeth. Of course, that was all before - before Quinn stopped going to school, before his mom started sleeping on the sofa...and before Annabeth was killed in a car accident.
Enter Geoff, Quinn's best friend, who insists it's time that Quinn came out - at least from hibernation. One haircut later, Geoff drags Quinn to his first college party, where instead of nursing his pain, he meets a guy - a hot one - and falls hard. What follows is an upside-down week in which Quinn begins imagining his future as a screenplay that might actually have a happily ever after ending - if, that is, he can finally step back into the starring role of his own life story.

I’m a big fan of Tim Federle’s funny Nate series so I was excited to pick up his first YA The Great American Whatever. This book is about Quinn, a guy trying to pick up the pieces of his life after the death of his older sister. Can he ever get his screenwriting mojo back, and maybe find the guy of his dreams too? This coming-of-age/coming out story is an entertaining and thoughtful read.

Annabeth was the glue holding Quinn’s family together. Now that she’s gone, Quinn can’t handle daily living, and his mother is in a holding pattern as well. Quinn’s friend Geoff comes to rescue him from his misery and the two go to a college party. He starts to see life’s possibilities again as he gains new insights about himself and his loved ones.

Quinn is a witty and self-deprecating character. I liked that he was into screenwriting and all the movie references in the book. Quinn was dealing with grief and remorse but the story never gets too dark. He had a plan to be a screenwriter/director team with his sister, and now he has to rewrite the pages of his life. I keep wanting to refer to Quinn as Nate so I guess the voice is pretty similar to Federle’s other leading man.

The supporting cast features Quinn’s best friend Geoff. He’s always there for Quinn but the self-absorbed Quinn doesn’t notice that Geoff is struggling too. Quinn’s mom is home with Quinn – she’s also having trouble moving on and I hoped to see her get more closure in the book. Amir is charming and mysterious as the older romantic interest – the romance doesn’t cover a lot of the story but helps Quinn on his journey.

Author Tim Federle is the perfect choice to narrate The Great American Whatever audiobook. All of his books have an autobiographical aspect to them and you can hear that personal connection in his performances. Federle’s tone is just right for the novel and he naturally conveys Quinn’s humor, sarcasm, doubt and despair. Federle’s superb timing and authentic emotion enhance the storytelling. The production quality is top-notch overall. You can also hear an interview with Federle at the end of the book.

Tim Federle talked to Simon & Schuster Audio about the Audiobook:

If you like Federle’s Nate series, or books like Simon vs. the Homo Sapiens Agenda, Aristotle and Dante Discover the Secrets of the Universe or Me and Earl and the Dying Girl keep The Great American Whatever in mind!

Blog Tour: The Stars of Summer by Tara Dairman

One thought on “Audiobook Review: The Great American Whatever”