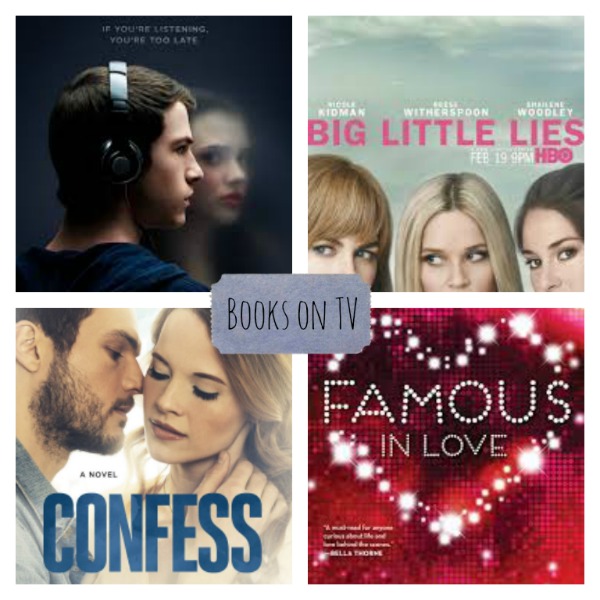 What’s better than seeing your favorite book on the big screen? Watching it every week on TV! Here are some upcoming book adaptations to add to your TBR and DVR wish list:

Based on the book by Liane Moriarty:  Goodreads | Amazon | Audible | IMDB | My Book Review

What it’s About: Told through the eyes of three mothers – Madeline, Celeste and Jane – Big Little Lies paints a picture of a town fueled by rumors and divided into the haves and have-nots, exposing the conflicts, secrets and betrayals that compromise relationships between husbands and wives, parents and children, and friends and neighbors.

This seven-part limited series is a subversive, darkly comedic drama that weaves a tale of murder and mischief as it explores society’s myth of perfection and the contradictions that exist beneath our idealized façade of marriage, sex, parenting and friendship. (HBO)

Based on the book by Rebecca Serle:  Goodreads | Amazon | Audible | IMDB | My Book Review

What it’s About: Famous in Love follows Paige (Bella Thorne) as she gets her big break after auditioning for the starring role in a Hollywood blockbuster. She must now navigate her new star-studded life and the highs and lows that come with being the new It Girl in town, as well as balancing her college workload. (Freeform)

Why I Can’t Wait to See: Addictive, juicy book about finding love on a film set should be very fun to watch.

Where to Watch: April 18 on Freeform

Based on the book by Margaret Atwood:  Goodreads | Amazon | Audible | IMDB

What it’s About: The Handmaid’s Tale is the story of life in the dystopia of Gilead, a totalitarian society in what was formerly the United States. Facing environmental disasters and a plunging birthrate, Gilead is ruled by a twisted fundamentalism in its militarized ‘return to traditional values’. As one of the few remaining fertile women, Offred (Elisabeth Moss) is a Handmaid in the Commander’s household, one of the caste of women forced into sexual servitude as a last desperate attempt to repopulate the world. In this terrifying society, Offred must navigate between Commanders, their cruel Wives, domestic Marthas, and her fellow Handmaids – where anyone could be a spy for Gilead – all with one goal: to survive and find the daughter that was taken from her. (Hulu)

Why I Can’t Wait to See: The subject matter is topical and dystopia is hot again thanks to our current political climate. The time is right to revisit this story. I’ll be listening to the audiobook (read by Claire Danes) before watching in April.

Where to Watch: April 26 on Hulu

Based on the book by Jay Asher:  Goodreads | Amazon | Audible | IMDB | My Book Review

What it’s About: After a teenage girl’s suicide, a classmate finds a series of tapes that unravel the mystery of her tragic choice. (Netflix)

Why I Can’t Wait to See: The thirteen reasons translated into thirteen episodes should work well, and the bullying theme is relevant and should hit home to its audience.

Where to Watch: March 31 on Netflix

Based on the book Anne of Green Gables by L.M. Montgomery:  Goodreads | Amazon | Audible | IMDB

What it’s About: Based on the classic novels, this new series revolves around the fiery Anne, an imaginative orphan, and the effect she has on her small town. (Netflix)

Why I Can’t Wait to See: The 8-episode series from showrunner Moira Walley-Beckett (Breaking Bad) will deal with relevant issues like “themes of identity, sexism, bullying, prejudice, and trusting one’s self.”

Where to Watch: May 12 on Netflix

Based on the book by Colleen Hoover:  Goodreads | Amazon | Audible | IMDB | My Book Review

What it’s About: A woman falls for an artist and the secrets they keep threaten to tear them apart.

Why I Can’t Wait to See: I enjoyed the book and think it will be cool to see an adaptation of CoHo’s work on this new video platform.

Where to Watch:  Coming this Spring on Verizon’s go90 app

Will you be checking out any of these shows this year? Let me know which one you’re most excited about!