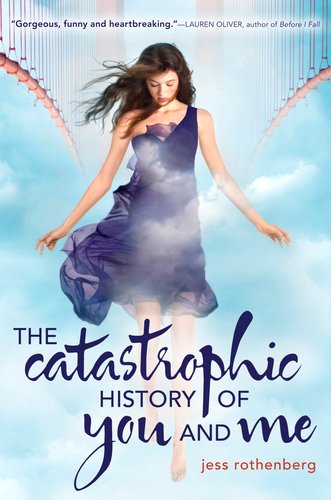 Book: The Catastrophic History of You and Me by Jess Rothenberg, Dial, February 21, 2012

This book sold me with the quirky title and Lauren Oliver’s blurb, and the afterlife premise about a girl who dies of a broken heart just sealed the deal.  This funny / sad book has a lot to offer, from the music inspired chapter titles, cheese references inspired by the title character Brie, and a touch of the 80s with Brie’s afterlife mentor, the leather-bomber-jacket-wearing-resident-lost-soul Patrick. This debut book takes you on a journey with character growth and emotional highs and lows perfect for those looking for an unconventional and satisfying story with heart.

The story starts off with a bang as fifteen-year-old Brie learns that her boyfriend Jacob doesn’t love her and then she promptly dies literally of a broken heart.  Though it seems like a downer subject matter, there are lighthearted moments and humor throughout that keep the story from getting too heavy. The book is broken up into five parts signifying the five stages of grief as Brie struggles to adjust and accept her fate and afterlife.

Brie is realistic in her portrayal of someone who has lost everything at such a young age. She had a loving family, lovable pet dog, and a group of best friends in addition to her boyfriend. Now she’s struggling with how to move on and how to let go of her past. Along the way, Brie’s approach shifts with each stage of grief. From being petty and vengeful in the Anger stage all the way through the Acceptance stage Brie’s character grows and the story develops in surprising ways.

The book is set in Brie’s Afterlife, and in Northern California’s Half Moon Bay and San Francisco. Brie, armed with the D&G (Dead and Gone) handbook and her afterlife guide Patrick, tests out her new paranormal powers as she wanders around. Through hometown visits and living as a ghost in San Francisco Brie’s experiences feel heartbreakingly real as she learns more about the loved ones she left behind and some unexpected reveals.

I found Brie’s entire journey to be interesting but the part that I found the most redeeming and satisfying is the Sadness and Acceptance portion at the end where I found the payoff I was looking for. The twists and turns in the story make it unique and never boring. And the emotional love story is fresh and captivating. It reminded me more than once of Before I Fall, a book that deals with a similar theme, though different in tone. The music themed chapter titles lend a nice touch and match up nicely with the chapter themes. I also loved that the author includes a listing of all the songs at the end. Now all I need is a Spotify playlist to go with it.

Recommended for fans of quirky and bittersweet plot centered books. Look for this book to hit shelves early next year.