The Fever has been high on my summer reading list ever since I first heard of it. So much good early buzz, a ripped-from-the-headlines premise about a mysterious illness in a small town – I couldn’t wait to read it! Like We Were Liars though, I think these over-hyped books create unrealistic expectations, and I didn’t love this one as much as I’d hoped. It is a smart mystery no doubt, and Megan Abbott has serious writing chops, really “gets” teenage girls and creates an eerie, disturbing story- I just wanted to connect to it a little more. Perhaps this book works better in print- I’m open to giving it another go. 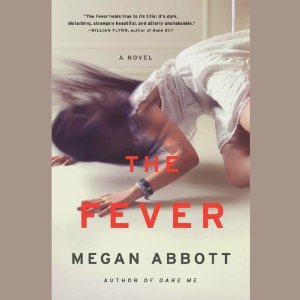 The Fever is centered on the Nash family- Tom and his teenage children Eli and Deenie. Deenie is at the center of the mystery- her best friend Lise suddenly has a seizure in class, and soon the town is in a panic to find out what caused this mystery illness. More girls fall ill, including another of Deenie’s close friends, Gabby.  Parents, students, faculty, and law enforcement are in a frenzy to halt this epidemic and speculate that it’s caused lake pollution, or a bad batch of the HPV virus. And is there a relationship between the girls’ first sexual experiences? What could be causing these girls to fall ill? That is what keeps you turning pages in The Fever.

I was not familiar with the Le Roy, NY case on which this story is loosely based, though I looked it up to satisfy my curiosity. Look it up after you read the book- it does make for a great setup for a story – so mysterious. The HPV virus tie-in intrigued me because if you have a preteen daughter you have felt some pressure from doctor’s to vaccinate. Since this vaccine is relatively new and the seizures attacked teenage girls specifically it seemed reasonable to point the finger there, especially since the high school officials in The Fever encouraged all girls to get the vaccine. The polluted lake also seemed highly suspect.

Beyond the mystery, the friendship dynamic is a compelling story of its own. I was warned about triangle playdates since I had a young child; friendships in threes are trouble! And in The Fever there’s mean girl behavior that has Deenie questioning her loyalties. With her friends succumbing to the illness she worries that she’s next or somehow to blame. Her complex feelings about a recent sexual experience also tie into her worry about her friends’ illness and she feels she’s losing control.

The Fever is written in third-person, and alternates viewpoints of Tom, Eli and Deenie. Each of the three holds a piece of the puzzle, with Tom in a unique position as teacher and parent, and older brother Eli also hearing things through the grapevine. The shifting point of view felt jarring at times, but also contributed to the tense feeling of the book. I felt on edge during the whole book.

I listened to the audiobook, which like the book also has three narrators: Caitlin Davies, Kirby Heyborne and Joe Barrett. The three voices are very distinct, so you never get confused about which character is speaking. That said, sometimes the audiobook took me out of the story and I was distracted by the narration. I can’t put my finger on it exactly – but I wonder if I would have enjoyed this book more if there was just one narrator. It could be that the nature of the book is more suited to print.

Listen to a sample of Kirby Heyborne performing one of Eli’s chapters in The Fever:

This was my first Megan Abbott book, and I definitely have a thirst for more reads from her – I have a copy of Dare Me on deck. I like intriguing mysteries like this one in the summer months and this one really unsettled me. It’s a well-plotted thriller and a realistic look at teenage girl friendships. I don’t think fans of Megan Abbott will be disappointed.

Read The Fever if you like: Crossover books, smart literary thrillers, mysteries, and books about realistic teenage girl friendships.

12 thoughts on “The Fever by Megan Abbott Audiobook Review”