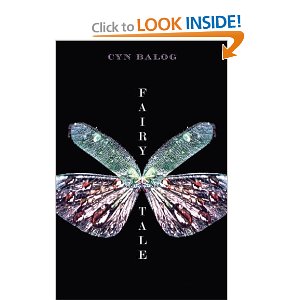 Description from the Publisher (Delacorte):

A captivating and witty dark fantasy that will have girls lusting after it.

Morgan Sparks has always known that she and her boyfriend, Cam, are made for each other. But when Cam’s cousin Pip comes to stay with the family, Cam seems depressed. Finally Cam confesses to Morgan what’s going on: Cam is a fairy. The night he was born, fairies came down and switched him with a healthy human boy. Nobody expected Cam to live, and nobody expected his biological brother, heir to the fairy throne, to die. But both things happened, and now the fairies want Cam back to take his rightful place as Fairy King.

Even as Cam physically changes, becoming more miserable each day, he and Morgan pledge to fool the fairies and stay together forever. But by the time Cam has to decide once and for all what to do, Morgan’s no longer sure what’s best for everyone, or whether her and Cam’s love can weather an uncertain future.

Fairy Tale is Cyn Balog’s debut novel. It is about a high school girl named Morgan and her neighbor/boyfriend Cam. They have known each other forever, they have the same birthday, and are best friends. Right around their 16th birthday things start to change. A new strange boy named Pip moves in with Cam’s family, and tells them Cam is meant to be a fairy king, and Pip is supposed to take Cam’s place in the family!

Morgan, Cam and Pip deal with these new changes and relationships. Morgan also has a little power of her own – she is a psychic who can predict the scores of football games, and where her friends will go to college. Morgan’s loyalties are tested, and the relationships grow and mature.

The story is told from Morgan’s perspective. And it is interesting to hear from the human side, as she notices Cam’s changes from human to fairy. Maybe it is from her psychic side, but she is the only human to see the fairy changes.

I enjoyed this novel- it was a fast paced, light, funny, romantic story.
And I look forward to reading Cyn Balog’s next books.

The Iron King by Julie Kagawa