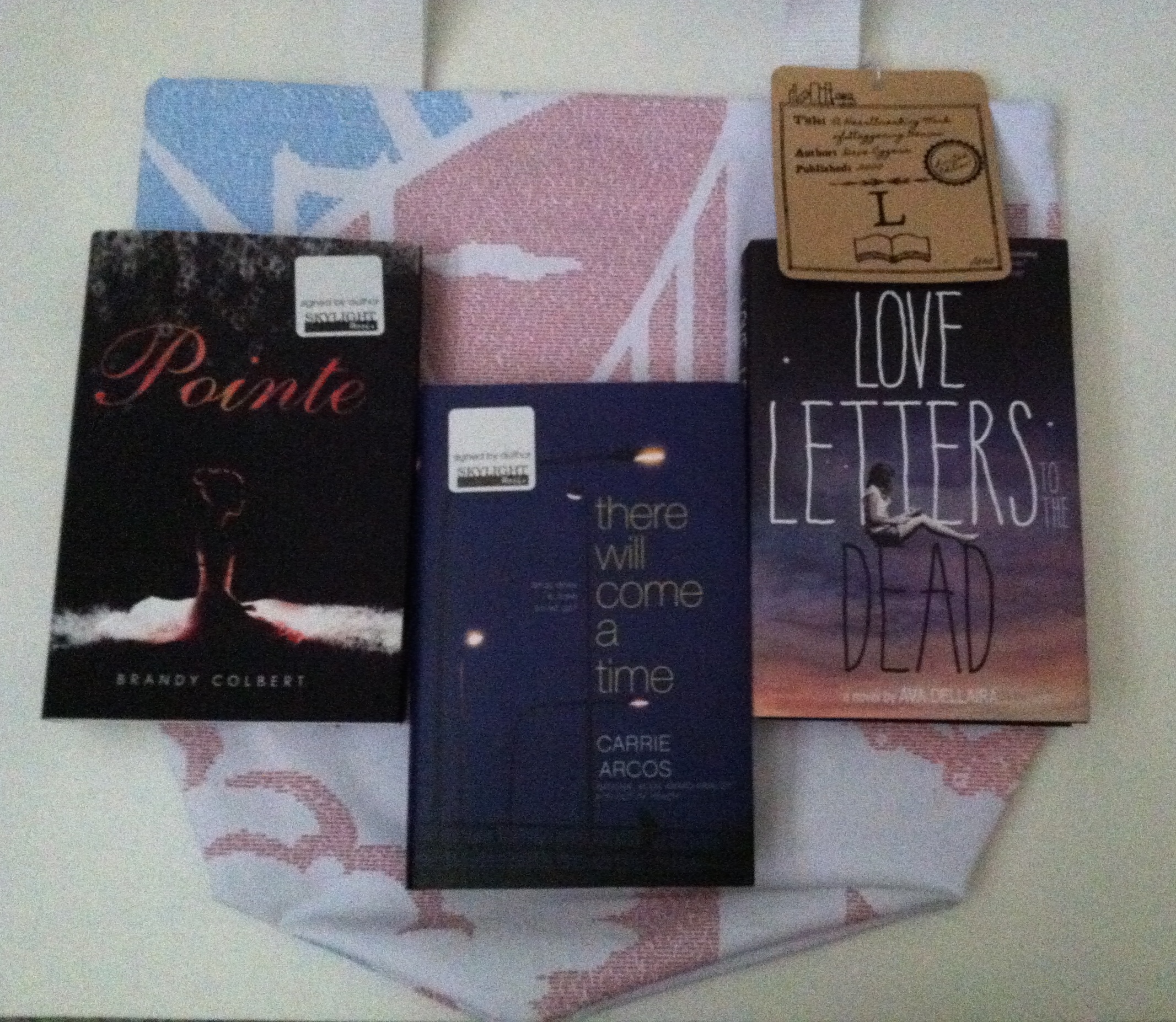 A Heartbreaking Work of Staggering Genius litograph totebag (includes over 18,000 words from the book)

There Will Come a Time by Carrie Arcos – signed

Love Letters to the Dead by Ava Dellaira

The Snow Queen by Michael Cunningham, performed by Claire Danes, from Macmillan Audio – This is from the author of The Hours, and is about family, love, loss and spirituality. And it doesn’t hurt that Claire Danes is the narrator.

Sure Signs of Crazy by Karen Harrington, performed by Cassandra Morris from Hachette Audio – This MG book looks cute and quirky, and it’s about 12-year-old Sarah, a girl with a painful past who comes to grip with her secrets one summer.

Torn Away by Jennifer Brown, performed by Lauren Fortgang from Hachette Audio – A girl loses everything and everyone she holds dear in a tornado and has to start again in unfamiliar surroundings.

Forgotten Sins by Rebecca Zanetti, performed by Karen White from Hachette Audio -The first book in the Sin Brothers series, Forgotten Sins is a romantic suspense novel about newlyweds Josie and Shane. Shane disappears and is found two years later with amnesia and some new abilities.

Perfectly Good White Boy by Carrie Mesrobian from Carolrhoda Lab- This made my day! The Sex & Violence author is back with another male POV book & it looks fantastic. PGWB is due out in October and is about a guy who just got dumped, and is about to join the Marine Corps.

Knockout Games by G. Neri from Carolrhoda Lab – Maybe you’ve heard of the Knockout Game on the news? It’s a “game” where kids target a random stranger and attempt to knock them out with one punch. In Knockout Games, G. Neri digs into the phenomenon and tells the story of KO participant Kalvin, and Erica the outsider who films the incidents.

Even in Paradise by Chelsey Philpot from Harper Collins – Described as “The Great Gatsby meets Looking for Alaska.”

On the Edge by Allison van Diepen from HarperTeen – This is about a girl caught in the middle of a Miami gang war.

Kiss Kill Vanish by Jessica Martinez from Katherine Tegan Books – A girl witnesses a murder committed by her boyfriend, and ordered by her father. Time to leave town!