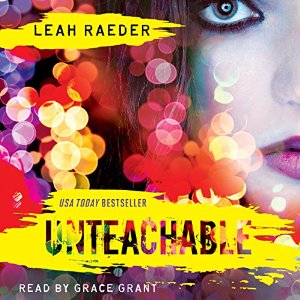 An edgy, sexy USA Today best seller about falling for the one person you can't have.

Maise O'Malley just turned 18, but she's felt like a grown-up her entire life. The summer before senior year, she has plans: Get into a great film school, convince her mom to go into rehab, and absolutely do not, under any circumstances, screw up her own future.

But life has a way of throwing her plans into free-fall.

When Maise meets Evan at a carnival one night, their chemistry is immediate, intense, and short-lived. Which is exactly how she likes it: no strings. But afterward, she can't get Evan out of her head. He’s taught her that a hookup can be something more. It can be an unexpected connection with someone who truly understands her. Someone who sees beyond her bravado to the scared but strong girl inside.

That someone turns out to be her new film class teacher, Mr. Evan Wilke.

Maise and Evan resolve to keep their hands off each other, but the attraction is too much to bear. Together, they're real and genuine; apart, they’re just actors playing their parts for everyone else. And their masks are slipping. People start to notice. Rumors fly. When the truth comes to light in a shocking way, they may learn they were just playing parts for each other, too.

Smart, sexy, and provocative, Unteachable is about what happens when a love story goes off-script.

In Unteachable, Maise and Evan’s sexy carnival ride meet-cute goes off-track when they discover they are really teacher and student.

Unteachable is a re-read (er, listen) for me. I first picked up Unteachable with the self-pub release last year, when people who hate NA were singing its praises. I liked the book then- it’s edgy and boundary-pushing (forbidden teacher-student relationship!) and features lovely descriptive prose.  Now Unteachable is reaching a whole new audience with Simon & Schuster’s backing with a shiny new paperback and audiobook release. I was eager to listen to the book with fresh ears so to speak.

Maise is in her senior year of high school and can’t wait to escape her messed up home life and go to film school. She’s always attracted older guys, so doesn’t flinch when sparks fly with Evan at the carnival. He seems really interested in her and different than the other guys. But discovering he’s her film teacher adds another layer of drama, and excitement too. The taboo element may put off some readers, but if it makes it less icky it’s technically legal since Maise is 18.

Maise is worldly for her age and has had to parent herself basically since her mom uses and sells drugs. Maise has her mind set on a better life, and she’s a confident, headstrong and bold young woman. She didn’t plan to fall in love with this guy who is probably the wrong guy.  She owns her sexuality and goes all-in to this obsessive relationship.

With Maise and Evan (Mr. Wilke) taking risks with stolen moments in between classes and after school, it’s only a matter of time for their illicit affair to be exposed. (Like the carnival’s rollercoaster, what goes up must come down) That’s perhaps part of the thrill for these two, in addition to exploiting the student/teacher dynamic.

The torrid affair is not the only thing happening in Maise’s life. Maise’s story includes some family and friendship drama, with a mean girl out to get her, and a drug lord trying to recruit her. And plus, she’s waiting for her college acceptance letters (and to earn the money for college.)  Maise wants to get into filmmaking so if nothing else she’s getting plenty of material for future scripts.

Like other New Adult books, Unteachable is frank in terms of sexuality, and the nature of the relationship is going to put-off some readers. I’m a parent and of course I was weirded out by Evan and Maise at times, no matter how strong their emotional connection. This is a messed up situation no doubt. As a romance fan, their story is strangely fascinating though.

I listened to the audiobook of Unteachable, read by Grace Grant. Grant is a frequent narrator of New Adult and Romantic Suspense books.  She’s comfortable with the steamy scenes and brings an emotional connection to the material. Her voice is not who I imagined when I read the book the first time – she might sound a little mature for Maise, though she captures her spirit for the most part. I was able to appreciate Leah Raeder’s words more with the audiobook so that was a benefit of listening. Solid performance overall, and you should use your personal preference to listen or to read this one. Here’s a sample:

Overall, I liked experiencing this book a second time, though I don’t think I enjoyed it quite as much. I think the element of surprise of something new and all the hype made the first read-through unforgettable and it’s hard to recapture all that with a repeat read. But I am still totally on board with whatever Leah Raeder comes out with next. Her next book is Black Iris, a “dark and sexy romantic suspense novel” coming out in May 2015.