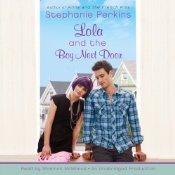 Audiobook: Lola and the Boy Next Door by Stephanie Perkins, Published by Listening Library, October 14, 2011

I have been talking about feel good books lately, and for anyone needing a pick me up romantic type book may I suggest you give Stephanie Perkins a try. Anna and the French Kiss is one of my favorite comfort reads and is quite successful in audio format. The companion novel Lola and the Boy Next Door is lovely and quirky too and set in the picturesque San Francisco Bay Area. I reviewed the print version, but realize I neglected to leave a few thoughts on the audio. I bought both of Stephanie Perkins’ audiobooks in October of last year when they made their audio debut. Does anyone else listen collect their favorite books in audio format too?

In Lola and the Boy Next Door, Lola “Life’s a costume party” Nolan, is in a relationship with an older musician when her old crush Cricket moves back next door after a few years absence. They departed on awkward terms, and his return brings back some old feelings. Cricket is sweet and nerdy, and with his own quirky sense of style and now that he’s back things are about to get complicated.

This book is fun to revisit in audio format and fall in love with the characters again. The tricky thing with reading the book first, though, is that I already had an idea of what I thought Lola should sound like. My impression of book-Lola is that she’s adventurous, dramatic, and a little kooky. And audio-Lola didn’t quite line up with what I had in mind. McManus’ delivery is more subdued and mature than I expected I guess. It’s almost like the narrator’s for Anna and Lola should switch places, because the Anna narrator was quite bubbly. But overall McManus does a nice job with the different characters and their personalities. Her character differentiation is subtle and not over the top, yet it is easy to tell the characters apart. She handles the voices of different genders and accents pretty well, and I thought she did a great job with Cricket, Max, and the two dads in particular.

In terms of the story itself, I think it holds up pretty well. I liked all the quirky character traits and the fun Perkins has with setting. There is a good balance of serious family stuff, romance, and friendship. And I liked that Lola has a job and we see her working at the movie theatre. As a fan of Anna it’s great to see Anna and St. Clair appear in this book so we can check in with them. But on the other hand it’s a testament to Perkins that I wished they were in the book a little less so that the focus is more on Lola, a character that holds her own. I liked all the details that make this book fun like costume design, figure skating, live bands, pie making, cute dogs, inventing, and boys next door of course. And Lola’s family is pretty awesome too.

I liked both the book and the audio versions of the book, but if I hadn’t read the book first I might have liked the audio a little more. If you want to re-read the books before the 2013 release of Isla and the Happily Ever After, consider giving the audiobooks a try. I’m looking forward to seeing how the final companion book ties all the characters together.

You can listen to a sample at Random House Audio here.

8 thoughts on “Lola and the Boy Next Door: Audiobook Review”