Better Nate Than Ever is a charming and laugh out loud funny debut from Tim Federle. I bought a copy of this book for my nephew recently and thought it looked so good I had to pick up a copy for myself too. Federle draws from his own Broadway experience to tell the story of a thirteen-year-old boy who runs away to New York to pursue his acting dreams. 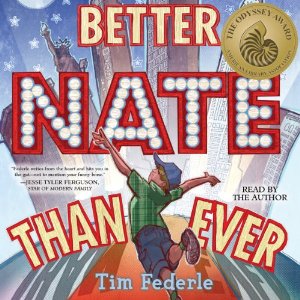 Book: Better Nate Than Ever by Tim Federle, Simon & Schuster Audio, May 2013

The Playbook:  Thirteen-year-old Nate lives in Jankburg, Pennsylvania, and dreams of starring on Broadway. He gets his chance to sneak away and audition for E.T. the Musical on Broadway, with a little help from his friend Libby.  The author talks about the inspiration for the book here:

Nate the Great – I loved how Nate is so brave to go after what he wants! The parent in me was scared to death of him traveling to NYC all by himself, but the kids got guts. One of the scenes that had me laughing out loud is when Nate read all the parts in E.T. the Musical for his Elliot audition.

Empire State of Mind  – Nate feels right at home in New York, and is taken in by the cheap pizza and clothing stores, and the multitude of cupcake shops. And Broadway of course! Federle really makes you feel that love at first sight emotion Nate feels about New York.

Supporting Characters – Nate goes to his first acting audition ever and meets all types of child actors, stage moms and snooty casting professionals.

We are Family – Nate’s family includes his parents, older brother, and estranged aunt. Nate’s family aren’t really supportive of his acting bug, hence the running away to New York. Their story evolves throughout the book though, and I’m interested to see how the family supports Nate going forward.

Questioning – Nate is bullied at school by kids calling him homophobic names. I like what Nate has to say about his sexuality, and that he’s still figuring things out:

(My sexuality, by the way, is off-topic and unrelated. I am undecided. I am a freshman at the College of Sexuality and I have undecided my major, and frankly don’t want to declare anything other than “Hey, jerks, I’m thirteen, leave me alone. Macaroni and cheese is my favorite food – how would I know who I want to hook up with?”)

Screenplay – Tim Federle writes such a fun story and makes Nate so endearing. There are recurring jokes, highs and lows in the audition process, travel, money, clothing and cell phone woes, and heartwarming surprises. The book is consistently entertaining, and Federle has a witty and strong voice.

Voice Acting– Author Tim Federle also performs this audiobook and does a bang-up job.  It makes sense that he’s such a natural considering his theater background, and he really brings the story to life. Federle uses different voices for all the many characters and makes the story even more hilarious. Federle brings a great energy to the story with his performance. This would be a fun book to listen to on a family road trip too. Listen to a sample:

Encore! – The Better Nate Than Ever series continues with Five, Six, Seven, Nate, available now. I can’t wait to read it!

Curtain Call: Read Better Nate Than Ever if you like: musical theater, New York, middle grade books, and you love to laugh.