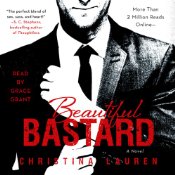 An ambitious intern. A perfectionist executive. And a whole lot of name calling. Discover the story that garnered more than two million reads online. Whip-smart, hardworking, and on her way to an MBA, Chloe Mills has only one problem: her boss, Bennett Ryan. He’s exacting, blunt, inconsiderate - and completely irresistible. A beautiful bastard. Bennett has returned to Chicago from France to take a vital role in his family’s massive media business. He never expected that the assistant who’d been helping him from abroad was the gorgeous, innocently provocative - completely infuriating - creature he now has to see every day. Despite the rumors, he’s never been one for a workplace hookup. But Chloe’s so tempting he’s willing to bend the rules - or outright smash them - if it means he can have her. All over the office. As their appetites for one another increase to a breaking point, Bennett and Chloe must decide exactly what they’re willing to lose in order to win each other. Originally only available online as The Office by tby789 - and garnering over two million reads on fan-fiction sites - Beautiful Bastard has been extensively updated for rerelease.

Beautiful Bastard is a rework of the Twilight fan fiction The Office by the writing team Christina Hobbs and Lauren Billings, aka Christina Lauren. Instead of a vampire-human relationship, in Beautiful Bastard there is a controlling boss-enterprising intern relationship. I haven’t read The Office fanfic, but if I didn’t know it was inspired by Twilight I wouldn’t have guessed. Like Fifty Shades, it’s a pretty racy read from beginning to end. I got a little embarrassed just listening to the audiobook!

Chloe Mills is an MBA student and assistant to Bennett Ryan, who is successful and gorgeous but kind of a condescending jerk. Chloe works hard but the demanding Bennett nitpicks every little thing about her work. They have a formal relationship and call each other Miss Mills and Mr. Ryan. They push each-others buttons yet have a grudging respect for each other. At one late night work session they give in to their sexual tension and so begins their torrid office affair.

The relationship progresses so quickly from hate to lust that it’s kind of jarring. The pair can’t keep their hands off each other as much as they try. The relationship is complicated since Bennett is technically Chloe’s boss, and she wants to get ahead on her own merits and not because she’s sleeping with him.

Chloe is a smart go-getter and I liked her a lot. I didn’t see her as a Bella type at all if that’s whom she’s supposed to be based on. She’s got confidence to spare and a sassy attitude and is the only assistant able to handle the difficult Bennett.

Bennett is more of an Edward type and is controlling and arrogant. He relies on Chloe and pushes her to be great, but is very hard on her. He knows he should stay away from her but is unable to resist. And he has a weird panty-hoarding tendency. He comes from a big family like The Cullen’s (Ryan Media is their family business) and they all adore Chloe.

This is a fun, silly read and I think it’s supposed to read as kind of ridiculous. It’s erotica so there is lots of sex, and not as much plot. The characters have chemistry though and I liked their banter and seeing their relationship evolve. And the book is written in alternating POV so we get to inside both Chloe and Bennett’s mind.

I listened to the audiobook, read by Grace Grant. If her voice sounds familiar, she also narrates The Love Series and the Marriage to a Billionaire series under a different name. She has the right sounding voice for Chloe, and translates her personality well. I’m a fan of this narrator, but ideally I would like if there were a male narrator for the Bennett chapters. Sometimes the character voices were not distinct enough to tell the difference between the two. Not a deal-breaker, but it’s something to consider for future books. The audiobook is a quick listen at just under 8 hours and I found it entertaining overall.