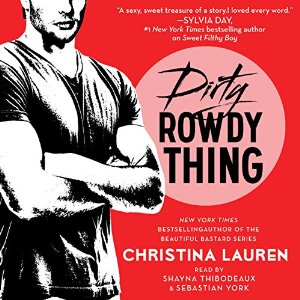 From the New York Times best-selling author of Beautiful Bastard, Beautiful Stranger, and Beautiful Player, Book Two of the brand-new Wild Seasons series that started with Sweet Filthy Boy - a story of friends, love, and lust.

Despite their rowdy hookups, Harlow and Finn don’t even like each other... which would explain why their marriage lasted only 12 hours. He needs to be in charge and takes whatever he wants. She lives by the Want-something-done? Do-it-yourself mantra. Maybe she’s too similar to the rugged fisherman - or just what he needs.

Read by Sebastian York and includes a bonus scene only available on audio!

The Wild Seasons series is about trio of best girlfriends and a matching set of guy friends that meet in Las Vegas and drunkenly get married. The first book Sweet Filthy Boy (my review) is about Mia and Ansel, and they try to make their Vegas nuptials stick in the real world. In the second book, Dirty Rowdy Thing, writing duo Christina Lauren shines the spotlight on Finn and Harlow, the fisherman and the trust fund baby. Though these two had a quickie divorce, they did have a honeymoon period that lingers when Finn shows up in Harlow’s city unexpectedly. Dirty and Rowdy hijinks ensue.

Harlow and Finn are both grappling with personal issues- Finn’s fishing business is struggling, and Harlow’s hurting for her ill parent. The two are there for each other at just the right time. And since they don’t have friend baggage, they can lean on each other physically and forget their troubles for a while. Finn’s idea of fun involves the use of rope, and Harlow enjoys their new distractions.

Fans of Sweet Filthy Boy will be happy to see the entire gang reunited in this follow-up. The group reassembles in San Diego for the opening of Oliver’s comic book store, where we meet new comic relief character Not Joe. The gang gets together for drinks & laughs & comic book talk. We get to check in on Mia and Ansel, and see glimpses of the next couple Oliver and Lola.

Christina Lauren always makes the current couple my favorite, and that’s the case here as well. Harlow and Finn have playful banter and smoking hot chemistry, and I enjoyed seeing their story play out. Since both characters play their cards close to the vest, it’s eye opening to learn more about them through their own perspectives. They both have obstacles to overcome though I rooted for their happy ending.

I listened to the audiobook of Dirty Rowdy Thing. Unlike Sweet Filthy Boy, this book is written in dual POV, and there are two narrators to match. Shayna Thibodeaux returns to narrate this book as Harlow, and Sebastian York (Beautiful Player) takes on Finn. Thibodeaux has a sassy, sarcastic, flirty tone that works great for Harlow. And York has that deep Southern drawl that is so hypnotic. Thibodeaux and York handle the funny/sexy/emotional scenes with ease and make this an addictive listen. I’ve only listened to Laurens’ books in audio format and think that is the way to go.

Audiobook Bonus Features: There is an epilogue that is exclusive to the audiobook! The epilogue gives a nice payoff to audiobook listeners (you can listen to part of it on SoundCloud here.) Also, the authors interview the audiobook narrators after the epilogue. It seems that the Christina Lauren writing team are audiobook fans, and I love that they listen to their books (and blush) and have favorite scenes that they share with narrator Sebastian York. It was so cool to get the audiobook narrators’ perspective on the books, and hear that they are very comfortable with the erotic tone of the books and seem to have a blast bringing the books to life.

This is another solid installment in the Wild Seasons series, and I daresay I’m enjoying these books more than the Beautiful series. Can’t wait for Lola and Oliver’s story in Dark Wild Night next fall.

You by Caroline Kepnes Audiobook
Furious Rush by S.C. Stephens – Excerpt and Giveaway