Mailbox Monday is a weekly event where we share our latest book arrivals. Link up and find new mailboxes to stalk at the Mailbox Monday blog!

I’m at Comic-Con this week and having a blast. The blog migration went pretty well though I’m still figuring out some things. Hope all of you had a great week! Can you believe it’s almost August? Wow!

I was very restrained at SDCC and only left with two books but my digital mailbox was busy.

California by Edan Lepucki – I have the book but the audio is read by one of my favorite narrators Emma Galvin so I couldn’t resist.

Wildflower by Alecia Whitaker – This YA is about a young up and coming country star, and the audiobook is performed by the author.

Beautiful Oblivion by Jamie McGuire – This is book one of the Maddox Brothers series, and the audio is performed by Phoebe Strole.

Finding Cinderella by Colleen Hoover – This is a standalone novella about one of the characters from the Hopeless series. The audio is performed by Jason Carpenter.

Not Otherwise Specified by Hannah Moskowitz – Can’t wait to read this one. It’s about a black bisexual ballerina growing up in a small town.

The Prom-Goer’s Interstellar Excursion by Chris McCoy – That title is a mouthful but this sounds fun. It’s about a guy whose prom date gets abducted by aliens!

Zac & Mia by A.J. Betts – This Australian YA is getting a Fall US release. It’s a cancer story described as TFIOS meets Eleanor & Park.

A Matter of Heart by Amy Fellner Dominy – This YA is about an Olympic hopeful swimmer who is diagnosed with a heart condition.

Denton Littles Death Date by Lance Rubin – In this world, everyone knows the day they will die. And Denton Littles death date is the day of his senior prom.

Words and Their Meanings by Kate Bassett – This book deals with grief and love and as the cover suggests some origami is involved.

Blind by Rachel DeWoskin – A fourteen-year-old gets blinded by fireworks and learns to deal with this new challenge.

Wild by Sophie Jordan – I like this NA series- this is the third book in the Ivy Chronicles, and centers on Georgia and Logan.

Arcana by Jessica Leake – This YA is described as a romantic, suspenseful, genre-bending debut set in Edwardian London.

The Stars Never Rise by Rachel Vincent – The first book in a new YA Paranormal series “about a girl who must join forces with rogue exorcists to save her sister and, ultimately, humanity.” 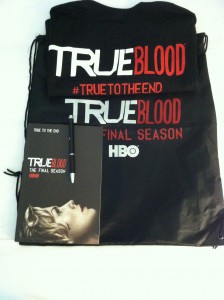 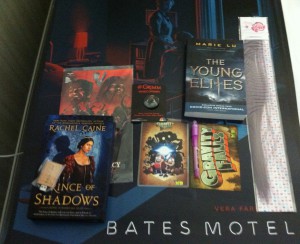 See? Only two books from SDCC – that’s a new record!