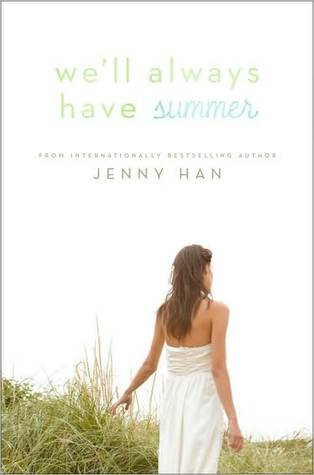 It’s been two years since Conrad told Belly to go with Jeremiah. She and Jeremiah have been inseparable ever since, even attending the same college– only, their relationship hasn’t exactly been the happily ever after Belly had hoped it would be. And when Jeremiah makes the worst mistake a boy can make, Belly is forced to question what she thought was true love. Does she really have a future with Jeremiah? Has she ever gotten over Conrad? It’s time for Belly to decide, once and for all, who has her heart forever.

This has been a fun trilogy, and I have enjoyed these books over warm sunny days. This series is a coming of age story about a girl named Isabel (Belly) and her relationship drama as she is torn between two brothers, Conrad and Jeremiah Fisher. The setting is a cozy beach house in Cousins Beach where Belly spends the summers along with her mother and brother at the Fisher’s house. Belly was always looked upon as the annoying little sister until things changed one summer. Conrad is the brother Belly has always had a crush on, but he is the more unattainable of the two. Jeremiah has a sweet and sunny disposition that capture’s Belly’s attention as well. Much drama ensues to bring us here to the final book where Belly will end this triangle once and for all.

This installment takes place a couple years after the last book, and the characters have grown quite a bit. Belly is now in college with Jeremiah and trying to go by Isabel now. Belly is endearingly her uncertain self and facing several difficult challenges. I think that the passing of time has changed the vibe of the books a bit. It hasn’t changed in a bad way; the tone just feels a little different. The characters have matured in surprising ways. It was somewhat unsettling to see some of the changes in the two brothers in this book. Though still recognizable, the brothers have some out of character moments. It was great to have Conrad’s view represented and get to know him better as he gets a turn at some of the narration.

There is the usual drama and angst in this book to keep things interesting, but it’s balanced with happier times too. My eyes were glued to the pages till the end to see how it would all shake out. I was pleased with the ending and felt that it was an emotional and satisfying end to the series.

This is a fun beach-read type series. The writing flows well, the setting is lovely, and the story is emotional and sweet. It is a great time to start on this trilogy so you can read them straight through. The first two books in the series are: The Summer I Turned Pretty followed by It’s Not Summer Without You . Author Jenny Han is following the Summer series with something different – a YA supernatural trilogy called Signs. The first book is called Burn for Burn and it is due out in 2012.

Check out Jenny Han’s website for more info about the book including the book’s music playlist and follow her on twitter. Find out more about the book at Goodreads or preorder at Amazon.

11 thoughts on “We’ll Always Have Summer by Jenny Han”