I feel like I grew up with Rob Lowe, from his bratpack days in The Outsiders and St. Elmo’s Fire to TV with Brothers and Sisters and Parks & Recreation to his endearingly bizarre part in Behind the Candelabra. He has amassed a lot of stories in his decades in the business and now he’s sharing them with the world. In Love Life, Rob talks about his sobriety, his marriage, sending his oldest son off to college, which singer/actress didn’t want to kiss him on set, and which material girl danced out of his life, and even how he decided to take the role of Dr. Vegas instead of Dr. McDreamy. I LITERALLY learned so much about Rob Lowe in Love Life. 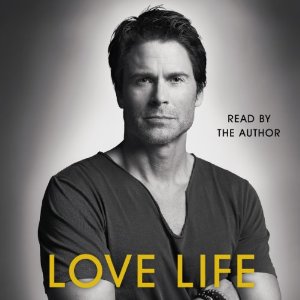 Love Life is Rob Lowe’s follow up to his memoir Stories I Only Tell My Friends. (I haven’t read that one yet so can’t comment if any of the stories are repetitive) I didn’t know much about Rob Lowe’s personal life going into this book, beyond the tabloid gossip of course, so it was interesting to learn his side of things. I first saw him in the movie The Outsiders where he plays Sodapop. It’s funny because my daughter read The Outsiders for school this year and they watched the movie in class, so Rob has a whole new generation of fans.

Rob Lowe talks about his acting process, how he chooses his roles, the politics of acting, and how he stays motivated in this tough business. This would make an interesting read for aspiring actors because Rob tells it like is about life on a movie or TV set, and how it’s more grueling than glamorous. He talks about how he challenges himself to take on roles that push the envelope to stay inspired in the business.  I was impressed in particular with his role in Behind the Candelabra, and he discusses his inspiration for the role, the modifications he made to his appearance, and how Matt Damon couldn’t stop himself from laughing in his presence.

Lowe recently ended a run on Parks and Recreation, where he played eternal optimist Chris Traeger for four years. I was a little disappointed that he doesn’t talk too much about his time on the show, though he has a lot of respect for the writing and his humorous costars. He mentions Rashida Jones (Ann Perkins!) dubbed him a benevolent narcissist, and from listening to the audiobook I’d say that’s an apt description, though Rob pokes fun at himself as well. From listening to this memoir, I’d say the character closest to his personality is Parks’ Chris Traeger.

Though Rob does name drop a bit in this memoir and talks about celebrity encounters with Warren Beatty, Madonna, and Hugh Hefner, many of the anecdotes are more about the daily life of an actor balancing life with a family. Rob’s been married for 22 years, and has two grown sons. It’s particularly moving hearing Rob talk about dropping his oldest son off at college, and his love and pride for his wife and kids.

There’s no mention of the infamous scandals in Rob’s life, though perhaps he’s saving them for another book. That said, readers looking for celebrity gossip will find entertaining stories in Love Life. Rob is a good storyteller and provides a good mix of family, romantic, and stories from the set.

Another thread that runs throughout the book is Rob’s sobriety. He’s been sober for many years, and credits his wife for helping him get clean. He can get a little preachy at times regarding his sobriety but it’s admirable that he’s made such a commitment to clean living.

I listened to the audiobook, performed by Rob Lowe himself. Since it’s his story, he brings emotion and heart to the table and is an engaging performer. Lowe has a conversational tone that makes the story feel intimate, like he’s sharing his stories from the trenches with his pals. There are also many “literally’s” sprinkled throughout the book, Chris Traeger fans. Fun fact: The intro and exit piano music on the audiobook is written and performed by Lowe’s son, John Owen.

Fans of Rob Lowe or celebrity memoirs will want to check out Love Life for the honesty, humor and humanity found in his stories. I look forward to circling back to the first memoir to see what I missed.