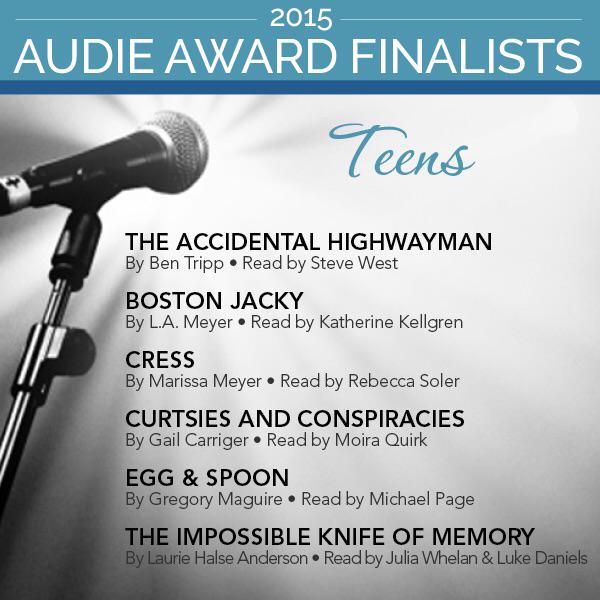 The nominations for The Audie Awards (The Oscars for the audiobook world) are in!

With the Armchair Audies, audiobook bloggers listen to the nominees and select their own winner.

Want to join the discussion? Follow #ArmchairAudies on social media:

I am once again judging the Teen category. This is my third year judging this category, though my choice matched up with the winner only once (The Fault in Our Stars.)

I have only listened to The Impossible Knife of Memory so far and that is a really powerful audiobook- glad to see it made the cut here.  I have a copy of Cress on hand and I’m obtaining the rest of the nominees through the library. I’m excited to start listening!

Based on history, Katherine Kellgren is the odds-on favorite! She has won in this category 4 times in the last seven years. (I think the Audie judges are hooked on the Bloody Jack series- there’s one more book in the series so that will change the category going forward!)

Have you listened to any of the nominees? What would you pick as the best Teen audiobook of the year?

Winners will be announced at the Audies Gala on May 28, 2015, at the New York Academy of Medicine in New York. Click here to see the full list of nominees. Want to know more about the Audies judging process? Read this round-one judge’s experience.

The Movie Date: If I Stay
A Mad, Wicked Folly by Sharon Biggs Waller Audiobook Review
Mailbox Monday
Where You Are by J.H. Trumble Book Review
Listening In with The 2012 Armchair Audies – Middle Grade category