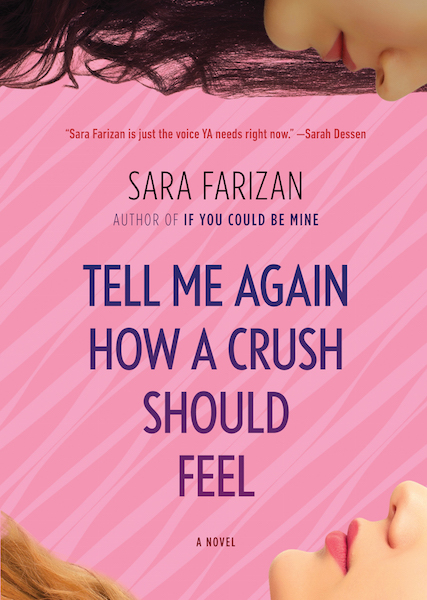 High-school junior Leila has made it most of the way through Armstead Academy without having a crush on anyone, which is something of a relief. Her Persian heritage already makes her different from her classmates; if word got out that she liked girls, life would be twice as hard. But when a sophisticated, beautiful new girl, Saskia, shows up, Leila starts to take risks she never thought she would, especially when it looks as if the attraction between them is mutual. Struggling to sort out her growing feelings and Saskia’s confusing signals, Leila confides in her old friend, Lisa, and grows closer to her fellow drama tech-crew members, especially Tomas, whose comments about his own sexuality are frank, funny, wise, and sometimes painful. Gradually, Leila begins to see that almost all her classmates are more complicated than they first appear to be, and many are keeping fascinating secrets of their own. 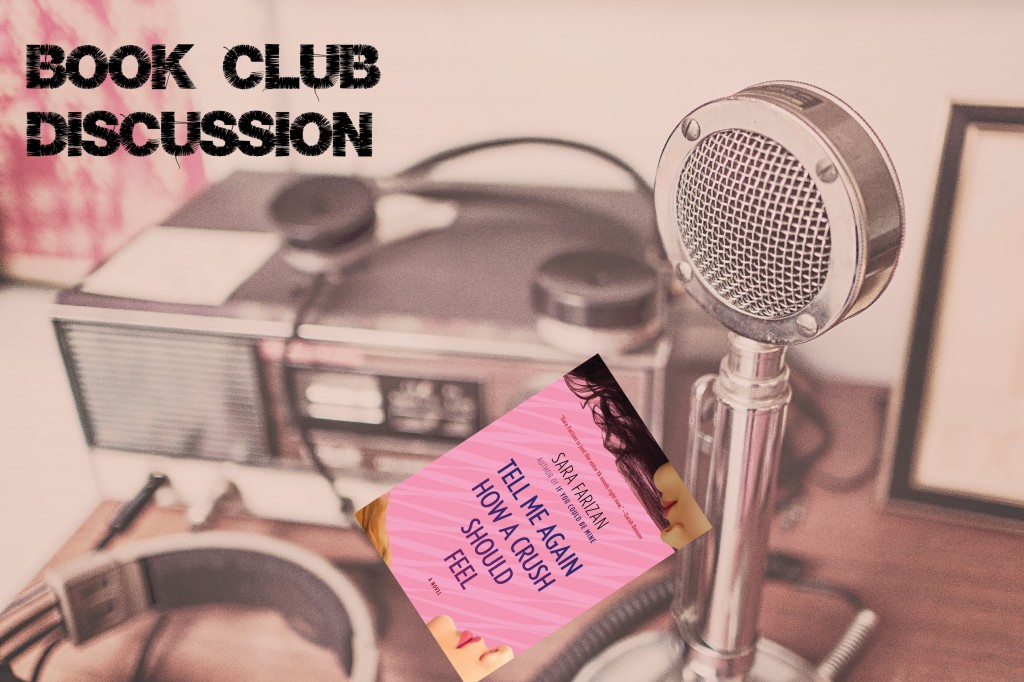 What did you think about the book? Give a twitter review (140 characters or less) sound bite.

We Heart YA: The book had a lighter/younger feel than I was expecting, but I really enjoyed the characters.

The Reading Date: Girl Meets Girl: A funny and endearing cultural story of coming-of-age and coming out.

What did you think about the tone of the book? Did you like the light/humorous touch?

We Heart YA: Overall the light tone was kind of nice/refreshing. So many LGBTQ books are heavy — and there’s nothing wrong with that — but diversity means broadening the conversation, and I think this story does that.

Also, it’s always nice when the hero/ine has a sense of humor.

Teen Lit Rocks: Yes — I loved it. Her first book was incredibly serious, so I appreciated seeing her range as a writer. It’s hard to be funny, but she definitely captured the first-generation experience perfectly.

The Reading Date: The light tone was a nice change of pace. I’d love to see more humorous LGBT stories.

What did you think of the portrayal of Leila’s Iranian American family? Did you gain a new perspective? Was there anything surprising or difficult to understand in the family dynamic?

We Heart YA: I could identify with some of Leila’s family dynamics because I have an immigrant mother, although mine was Chinese/Taiwanese, not Iranian. Especially the parent and community expectations. Partly because of that, I was expecting more pushback about Leila’s sexuality. But I guess it was nice that she had such a loving family environment.

Teen Lit Rocks: I felt it was incredibly believable, but I’ve had Persian and Persian Jewish friends who’ve shared the strict expectations held by their families. My close friend was disowned by her family in her TWENTIES, when she finally admitted to them that she’d had a serious “white” boyfriend since she was an undergraduate. They threw her out of the house, took away her car, and don’t speak to her — all because her boyfriend wasn’t a socially acceptable white-collar professional (he’s a photographer).I always thought her parents would get over it, but they basically act like she’s dead to them.

I was actually surprised that her parents handled it as well as they did. It was refreshing.

The Reading Date: The family scenes really shined for me. Leila’s parents are strict yet supportive, even when Leila’s sexuality takes them out of their comfort zone.

Leila struggles with coming out, partly because of her parents’ reaction. (A family friend who came out was disowned) Would the story have been different if Leila had been another ethnicity, or if the book was set in another part of the country/world?

We Heart YA: Sara Farizan’s debut novel, IF YOU COULD BE MINE, was set in contemporary Iran, and from what I’ve heard, the story isn’t as rosy as this was. So yes, I think the setting of TELL ME AGAIN HOW A CRUSH SHOULD FEEL definitely had an impact on how things unfolded, and how Leila was accepted. America still has a ways to go, but broadly speaking, we’re a pretty accepting place.

Teen Lit Rocks: Well, she already discussed the issue of being gay in Iran in her debut novel, and it was much more intense, so I think a book about LGBT characters in certain parts of the world tend to be fraught with the constant possibility of danger and violence. I think many cultures have a tough time dealing with equality and understanding that being gay isn’t a “lifestyle choice,” so I imagine the story would’ve been somewhat similar had Leila been Latina, Asian, Caribbean, African, etc..

The Reading Date: I think coming out can be difficult for all kinds of families and situations. Leila’s family took it better than expected. Their reaction felt realistic, though not sugar coated.

There are a number of side characters introduced, like the theater group, the popular clique, Leila’s sister, and Leila’s teacher. Which characters enhanced the story for you?

We Heart YA: Well, when Saskia first showed up, I definitely felt wary, because I was expecting a more stereotypical “Manic Pixie Dream Girl” role for her. Instead, Farizan took that storyline to a different place, and I appreciated that. I also really liked the dynamics that arose between Leila and Lisa, and between Leila and Greg.

The Reading Date: I really liked that the side characters disproved stereotypes and helped Leila to overcome her own bias. Tess was my favorite, though I liked the theater tech girls as well. Tomas grew on me, and played an important role in Leila’s journey to acceptance.

Saskia is the newcomer who gets Leila to come out of her shell, though she ends up being the toxic Mean Girl character. What did you think about Saskia’s character and when did you suspect she was trouble?

We Heart YA: I didn’t see how toxic Saskia was going to be until almost halfway through the story! It wasn’t a twist so much as a slow reveal, and I liked that.

Teen Lit Rocks: I thought she was a worldly pansexual who was going to break her heart, but I didn’t think she’d end up being quite the villain that she became (this feels like a big spoiler!).

The Reading Date: Ugh, Saskia! I thought she was such the manic pixie dream girl at the beginning, though I never trusted her intentions. I could see how Leila could get caught up in the whirlwind of her but worried that she would get hurt.

Tomas thinks “girls have it way easier” to come out as lesbians compared to men coming out and that it’s even “encouraged by straight men.” Do you agree? Do you think that the reactions to Leila’s coming out were typical?

We Heart YA: I’m not sure I feel qualified to answer who has it easier… but I agree that straight men comment on how hot it is for girls to make out (lesbians or not), whereas I don’t think straight women fetishize guy-on-guy physicality. Also I think girls can be masculine in a positive way — i.e., the tomboy — whereas boys don’t have that same positive equivalent for being feminine.

Teen Lit Rocks: I think it’s tough for all LGBT teens to come out, but I do agree that gay men and their sexual preferences scare homophobes more than their lesbian or confusing bisexual counterparts. It’s hard to rank something like this, but I do think gay men and trans folks probably have a harder time in general than gay women, who according to a few of my own lesbian friends (one of whom is the head of a university’s Queer Studies department), are perceived more as a curiosity than a threat/affront to heteronormative society.

The Reading Date: It’s a plausible theory but I think it’s hard for everyone to come out and feel safe and accepted.

How did Leila change over the course of the novel?

We Heart YA: She became more accepting of herself, which is always important. But even more than that, I think Leila learned that things are not always what they appear on the surface.

Teen Lit Rocks: She’s finally willing to be herself, and she realizes she’s worthy of love. She also discovers that who people are and who they seem can be two very different things altogether.

The Reading Date: Leila comes to terms with who she is in and gets comfortable in her own skin. She is less judgmental of others and lives her life truthfully.

How does this novel relate to your life? Did this novel broaden your perspective or change you?

We Heart YA: Both themes — self-acceptance, and appearance vs. true nature — are applicable to everyone. (Hopefully!)

Teen Lit Rocks: The book made me think of Persian culture again, and it touched me, because the 16-year-old daughter of close friends recently started a relationship with another girl. She’s like a niece to me. I was surprised, because I thought she was straight and she had had casual boyfriends, so I wondered if it was a phase or if this was her coming out. The line when the real love interest tells Leila she’s not sure she’s bi or just a “Leila-bian” really hit home. I don’t need to label my beautiful young friend. I just need to support her and her relationships. I’m so happy that she has parents who love her just as she is (in fact, they’re actually relieved!).

The Reading Date: I appreciated the cultural perspective in this book and can understand how hard it can be to veer from your parents’ path, in terms of sexuality or career profession.

Does any particular passage or scene stand out in particular? Any final notes on the book?

We Heart YA: I really liked that while one diverse element was in the spotlight (i.e., Leila’s sexuality), there was another diverse element just sort of hanging out, not making a big fuss about itself, because it just happened to be part of the character (i.e., Leila’s Iranian background). It made me think about how diversity isn’t necessarily a one-and-done kind of thing. There are a lot of checkboxes, so to speak. Why should a character only get to check off one of them? Certainly in real life, people are all sorts of combinations!

Teen Lit Rocks: Again, the line about Leila’s girlfriend being a “Leila-bian” hit home, because if we focus on love instead of labels, maybe it would be easier to understand why the only gay agenda is to live and love like everyone else! I also loved the final conversations between Leila and her sister Nahal. It’s all about unconditional love and acceptance!

The Reading Date: The author provides a fresh, thoughtful perspective on the coming out story. The comedic voice was refreshing.

Have you read this book- what did you think?

In December we are reflecting back on our favorite diverse titles of the year. Don’t miss it!

5 thoughts on “YA Diversity Book Club: Tell Me Again How a Crush Should Feel Discussion”