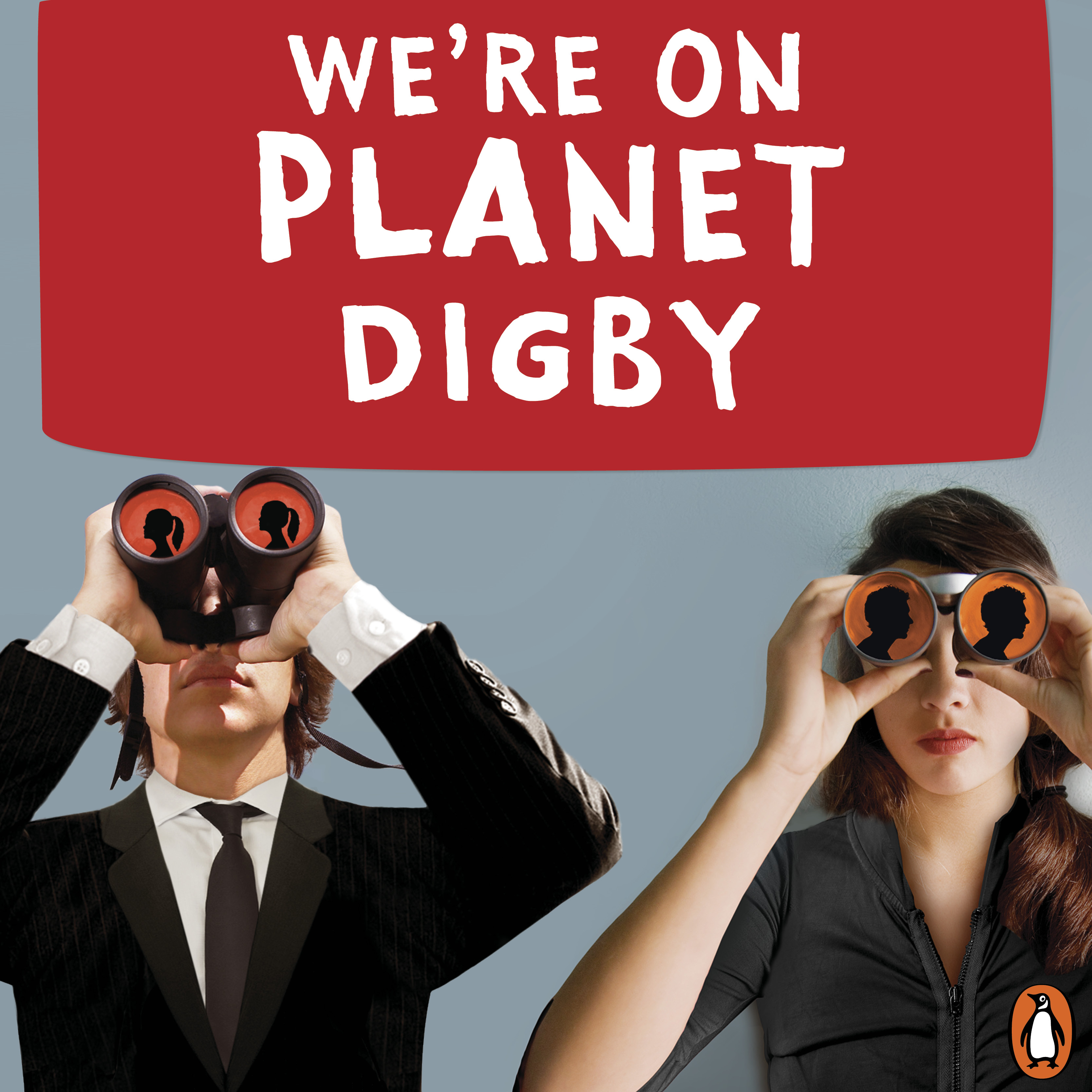 Happy Publication Day to Trouble is a Friend of Mine! This book book is witty and quirky and features a teen-Sherlock type who recruits the new girl in town to help solve a mystery. Read on to find out more about the book, read an Author Q&A with Stephanie Tromly, and make sure to enter to win a copy for yourself! 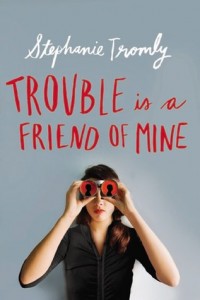 Her first day not in school (because she cut) in her new hometown that will soon be her old hometown (because she’s getting out of Dodge as fast as she can) Zoe meets Digby. Or rather, Digby decides he’s going to meet Zoe and get her to help him find missing teenager. Zoe isn’t sure how, but Digby—the odd and brilliant and somehow…attractive?—Digby always gets what he wants, including her help on several illegal ventures. Before she knows it, Zoe has vandalized an office complex with fake snow, pretended to buy drugs alongside a handsome football player dressed like the Hulk, had a throw-down with a possible cult, and, oh yeah, saved her new hometown (which might be worth making her permanent hometown after all.)

A mystery where catching the crook isn’t the only hook, a romance where the leading man is decidedly unromantic, a story about friendship where they aren’t even sure they like each other—Trouble is a Friend of Mine is a YA debut you won’t soon forget.

And now, please welcome author Stephanie Tromly to the blog. She’s here to talk about her writing inspirations, favorite Movies, TV shows and Books, favorite scene from Trouble and more!

Congrats on the release of your first novel! You have worked as a screenwriter- how did you decide to write a YA novel and how is writing a novel different than screenwriting?

Thank you so much! I’m very excited.

Surprisingly, I didn’t have to change much of my core process when I started writing YA. I stuck to many of the same rules: dramatize rather than explain (that’s a Henry James rule, by the way), keep everything kinetic and full of movement, let the world build itself, make sure the dialogue is true and utterable…that kind of thing. Of course, these things might be as true for writing in other genres…I’ve yet to find out, I suppose, as I’ve not tried writing any other kind of longform fiction. I suspect, though, that I’d be allowed to ruminate more if I wrote a piece of, say, literary fiction and I think worldbuilding rules for fantasy are different.

I decided to write YA because I needed a break from academic writing. I was in the middle of writing my dissertation when I got pregnant and after I had my kid, sitting in the library for seven hours at a stretch was out of the question. My mind needed something lively and bright and free…Zoe!

Your book has garnered comparisons to John Hughes movies and TV shows like Veronica Mars. What is your favorite teen movie or TV show, and whom would you cast in a TV or movie version of your book?

Favorite?! Only one? Hahaha. Of course I love Clueless, Mean Girls, Gilmore Girls, all John Hughes (including Uncle Buck, by the way),Veronica Mars, old Nancy Drew with Pamela Sue (six year old me sat around for hours with curlers trying to get that flip in my hair), Awkward (the first two seasons especially), Lizzie McGuire (come clean, Hill), anything to do with the Traveling Pants…

In terms of casting, I suspect that whoever they’ll cast is unknown for now…but when I was writing it, I thought a lot about a young Ryan Gosling as Digby and a young Anne Hathaway crossed with Rory Gilmore (I use the character name rather than the actress’ name on purpose because–sorry, Alexis–ultimately, Amy Sherman Palladino is the one I’m hollaing at).

What was your favorite scene to write or funniest line?

I’ve said before that I wrote a scene in the sequel for Felix that I found disproportionately fun and that’s probably the closest I’ll come to singling out any one thing. I don’t know if it’s going to make the cut, though, so I hesitate to describe it. Cutting it will just be that much harder…

In many ways, I most closely identify with Felix. I’m not a genius but I was more than two years younger than my classmates and I have to say that their reaching puberty scarred me more than when I myself went through puberty. They tried to include me in their conversations but my confusion was laughable – I don’t blame them for laughing because it was funny. Because of this, writing Felix’s misapprehensions is cathartic and that feeling of release makes my time with Felix special.

What books have influenced your life the most, and what books are you reading now?

I read the classic Nancy Drew series over and over and over when I was first learning to read and write in English. I would say that Nancy changed my life in a material way. All the writers who wrote as Carolyn Keene were my first and best teachers.

In terms of books that have changed me emotionally, I’d have to point to Virginia Woolf’s To the Lighthouse and Mrs. Dalloway. I don’t think I knew how to understand my mother until I read Woolf coming to an understanding of hers. The list of stuff that’s excited me intellectually is crazy long…

Right now, I’m in the middle of a few books. Balzac’s History of the Thirteen (I love stories about secret societies) is my current ‘respectable’ book. I am also reading Renaissance, the novelization of the Assassin’s Creed game. I love Florence and while I abhor killing, I love the idea of assassins running on those terracotta rooftops in hooded capes. I read that kind of action-y stuff when I’m feeling sluggish. The other series I’m finally reading is The Diary of a Wimpy Kid. I loved the movies but I’d never read the books until Sabrina, my incredibly cool and withit niece, bought me the book and INSISTED I read them. The writing is awesome.

HOWEVER! If my editor asks, please tell her that I have read diddly-squat since signing up with Penguin as I have been too busy living, breathing, and writing my own stuff twenty four hours a day.

Your secret is safe with us!

The book title always brings the song “Trouble is a Friend” to mind. Did you have any input on the book’s title and what other titles did you consider?

I submitted the book under a long title that started with the phrase “Digby 101” followed by a colon and a phrase that sounded like a description from a college syllabus. I think it was something like “An Introduction to Juvenile Delinquency and Other Good Deeds.” I had the notion that I’d have the series progress as college courses would. Everyone (including me) quickly realized it’d be too long and cumbersome.

The song is great but really, the current title is a play on the Raymond Chandler’s Trouble Is My Business. If you notice, Digby’s first name is spelled “Philip” rather than “Phillip,” which is the more common way it appears. This is an allusion to Chandler’s Philip Marlowe. I can’t even begin to tell you about how much I love Raymond Chandler and noir.

Do you have any fun book launch celebrations planned?

To be honest, I’ve been sick with nervousness about the whole thing. I know that it will be anticlimactic in the sense that I won’t physically transform or anything but…I think that when August 4 comes and goes, and I don’t just spontaneously combust, I’ll treat myself to a party sized bag of chips, a stack of magazines, and maybe sit in bed and cry with relief.

Can you give us a little hint about what you’re writing now? Will Digby and Zoe’s story continue?

Oh, yes…they will go on. Trouble will make a comeback.

Thanks so much, Stephanie! You rock!

Trouble is a Friend of Mine is on sale now – start reading!

Stephanie Tromly was born in Manila, grew up in Hong Kong, graduated from the University of Pennsylvania, and worked as a screenwriter in Los Angeles. She is the author of Trouble Is a Friend of Mine and lives in Winnipeg with her husband and son.

Enter to win a copy of Trouble is a Friend of Mine, courtesy of Penguin Teen! Giveaway is open to US and Canada entrants age 13 and up: