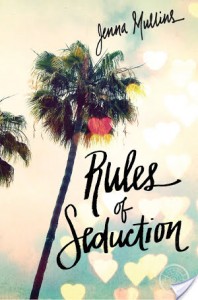 The first rule of seduction is: don't fall in love.

Fresh out of college, Dani Young heads for the LA sun to chase her dream of becoming a screenwriter-director. So when her former BFF turned actress Elise offers Dani the opportunity to work on the hit teen show Vamp Camp, Dani can't refuse, even if it comes at a price: Elise wants Dani to seduce her boyfriend, Vamp Camp superstar Tate Lawrence. Turns out Elise has some major trust issues, and needs Dani to test Tate's faith. The only rule: don't fall in love with him.

Sure, Dani doesn't mind occasionally glimpsing Tate's megawatt smile...or accidentally-on-purpose brushing up against his perfect torso...but she's no fool. There's no way she'd ever fall for a shallow celebrity and no way one would fall for her, a lanky movie nerd.

Amidst vampire-crazed fans, a conniving fellow intern, and a devilishly handsome showrunner, Dani feels like all the rules she used to know have disappeared, except for one:

Love doesn't play by the rules.

Part The Devil Wears Prada, part How to Lose a Guy in Ten Days, this story of friendship and romance is sure to appeal to fans of Stephanie Perkins, Jennifer E. Smith and Anna Todd.

I can’t resist a good Hollywood rom-com, and Jenna Mullins’ debut about a girl who wants to make it into the movie business is a lot of fun. Rules of Seduction features a film school grad who heads to Los Angeles to get her big break. Her dream job goes up in smoke not long after her plane lands at LAX but fate intervenes and soon she’s back on her feet.

Dani’s first introduction to Hollywood doesn’t go well, but she has a sweet roommate to commiserate with and Golden Girls-episodes to binge. Dani runs into her old friend Elise in Venice Beach and finds out her boyfriend (Hollywood bad boy Tate Lawrence) is in the hot show “Vamp Camp” – a Civil War/Vampire mashup. Elise lands Dani a job as an intern on Vamp Camp, and she only asks that Dani spy on/fake seduce her boyfriend to test his loyalty. (She’s been burned before)

Rules of Seduction is a fun, breezy read about the less glamorous side of Hollywood. Dani does her best to succeed as an intern though backstabbers try to get in her way. Vamp Camp’s showrunner takes an interest, but it is the off-limits Tate who she really connects with. Dani makes a list of rules for herself to suit every situation, though not falling for Tate is the hardest one to abide by.

The Hollywood/backlot setting provides a lot of opportunity for juicy drama and angst and Dani is caught right in the middle of it. Does she have thick enough skin to make it in this business? Author Jenna Mullins works at E! and her Hollywood inside knowledge lends a sense of authenticity to Rules of Seduction.

Rules of Seduction is a page-turner perfect for your summer reading adventures. The humor and reveals kept me entertained and I didn’t want to stop reading Dani’s story. If you like rom-coms, Hollywood stories, and books like Famous in Love definitely give this one a try.

In fourth grade, Jenna put her classmates into a story about fire safety, and they laughed the entire time she read it aloud. Since then, she’s been writing with the sole purpose to entertain other people. Fire safety, however, fell to the wayside when she accidentally set her grandmother’s bathroom on fire when she was 12.

In 2010, she moved from Indiana to Los Angeles to intern at E!, and she is now a writer/editor/pop culture gatekeeper at E! Online. A Midwest girl who prefers Southern California weather, Jenna loves the Indianapolis Colts, saving Hyrule and training for her backup dream career: deciding what goes into the baskets on Food Network’s Chopped. She currently resides in LA with her nerdy, handsome boyfriend Kyle and their two fluffier-than-normal cats, Glenn and Zelda. Follow Jenna on Twitter.

Ready to follow the Rules of Seduction? Enter to win a copy!

I Want It That Way by Ann Aguirre Review & Giveaway