Sinner is a book about two supporting characters from Maggie Stiefvater’s Wolves of Mercy Falls series, Cole and Isabel. I will always have a soft spot for this series because of Shiver, one of the first paranormal books I truly loved. But, I never really warmed to Cole and Isabel per se; I was usually waiting for the story to go back to the lead couple Sam and Grace. I’ll have to say though that Sinner shows that Cole and Isabel are quite interesting in their own right! Sinner feels like a totally different story that’s less rooted in werewolf lore and more reality-based. With a new LA locale and a little distance from Forever, Sinner forges its own path. 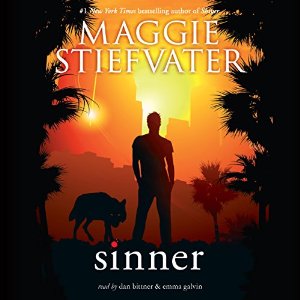 In Sinner, Cole St. Clair leaves Minnesota for LA to record a new album, while a reality TV crew tags along to document the process. But the Real Reason Cole’s in LA is to be reunited with girl-that-got-away Isabel Culpepper. Isabel is in LA with her family, working in a boutique and going to school. Isabel and Cole are their own worst enemies in terms of getting back together – both are very headstrong and stubborn and masters at hiding their emotions. And just maybe a reality TV setting is not the best backdrop for their reunion.

Cole is trying to put the pieces of his life back together, mending fences, trying to live the straight edge life, and rebuilding his band. His band NARKOTIKA was once larger than life and the reality show gig will help reintroduce him to fans. But the producer of the show has less than noble intentions and would like nothing more than for Cole to trip up live in front of the cameras. How does Isabel fit in with this plan?

Isabel thought she put Cole behind her- but when he marches into her store back from the dead all the old feelings she’s buried come back. Isabel is dealing with some family drama in the House of Ruin and processing her parents’ seemingly inevitable divorce. Adding a werewolf in LA to the equation is all she needs. Didn’t she leave the wolves behind her? She’s not sure what kind of surprise his arrival will bring.

It’s an entertaining ride watching Cole and Isabel get reacquainted and figure out what they want in life. I’m glad Maggie Stiefvater thought to give these two their own story. It’s been ages since I’ve read the Shiver books, but this book is so completely different it doesn’t matter.

I listened to the audiobook, performed by Dan Bittner and Emma Galvin, who portrayed these characters in Forever. Both narrators give a lot of personality to these larger than life characters. Emma Galvin plays tough very well, and Dan Bittner is a good choice for the gregarious Cole. There are some cool side characters in Sinner; from Cole’s driver friend Leon, to Baby the reality TV producer, to Isabel’s cousin Sofia, and the narrators bring these characters to life as well. Cole also has to participate in some radio interviews to promote himself and the audiobook production gives it an authentic feel. At the end of the audiobook there’s a Maggie Stiefvater bonus track featuring her Sinner book playlist song Taking On The Sun.

Check out a sample of the Sinner audiobook, as seen on the author’s Soundcloud profile:

This is a different sort of book for Maggie Stiefvater and I like it! It’s more contemporary in feel than paranormal, and more mature as well. You can still recognize Stiefvater’s lovely prose though and it is good to be back with these characters. Fans of the Wolves of Mercy Falls should check out this book, even if some of the details of the trilogy are kind of fuzzy.