Blythe Woolston’s Black Helicopters is a powerful little book that cuts to the bone. It is scary and harrowing and reads like a dystopian but is very much set in the present. There are a lot of layers to the novel, so much that I’m afraid I’ll need to re-read it a couple more times to fully appreciate all it has to offer. The audiobook had me on edge and tense throughout and left me with a lot to process. 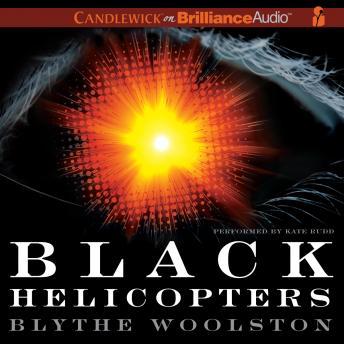 Then: Ever since Mabby died while picking beans in their garden – with the pock-a-pock of a helicopter overhead – Valkyrie knows what her job is: hide in the underground den with her brother, Bo, while Da is working, because Those People will kill them like coyotes.

One Year Ago: Those People have come. It has to be them; because when Valkyrie and Bo return from a lesson of alert and ready, everything is on fire and Da is gone. But they’ve been trained by their Da for this: It’s time to wait. Time to prepare. Time to be invisible.

Last Fall: Maybe Da’s not coming back. Maybe. So Bo and Valkyrie must enter the outside world – a not-so-smart place where little boys wear their names on their backpacks and young men don’t pat down strangers before offering a lift. People should be more careful.

This Afternoon: Valkyrie finds herself in a twisted game of life and death where winning is all that matters. And in a final, trigger-tense moment of when and where and who, it all comes down to . . .

p>My first introduction to Black Helicopters was when I saw it on the Cybils nominee list. I thought maybe it was miscategorized as realistic fiction, though since it’s set in our world it’s that much more unsettling.

The author jumps right into the action, leaps around in time, and leaves the reader to piece it all together. It’s dark, gritty, and full of despair, and set in a world not often seen in YA books. This jewel has a lot to offer and I think would make for an excellent book club discussion.

Valley aka Valkyrie is our fearless narrator and her troubled mind is a dark place to be. She goes to hell and back on her journey, growing up a survivalist and learning to become a suicide bomber. Part of the confusion I had reading this book I’m sure is by design since Valley isn’t exactly forthcoming in her narration. The non-linear structure gives you a glimpse into how Valley came to be in her current precarious situation. She’s a cunning survivor and your heart aches for her.

I listened to the audiobook, narrated by the excellent Kate Rudd (The Fault in Our Stars.) Rudd gets into Valley’s psyche and brings the horrors of her world to life. She reads Valley with a detachment very fitting of the character. I had a hard time putting this one down but at the same time a hard time listening to it due to the intensity. Kate Rudd made me believe Valley’s story and gives a dauntless performance.

This book is a tough one to review because after only one reading I think I’ve only scratched the surface of what this book has to offer.  It’s a brief, absorbing literary novel that stays with you. Black Helicopters is a challenging read that’s worth your time and should appeal to readers of literary fiction, horror, and dystopian of mature YA age and up.

Black Helicopters is a YA Fiction Cybils nominee.

The book trailer gives you an idea of what it’s like to read this book:

Other reviews of Black Helicopters:

The Midnight Garden – Wendy says “Valykyrie’s words tumble out with rough fury, and there’s a sense of jittery paranoia that you just can’t shake, even as your brain races to make sense of the changing puzzle pieces laid out before you.”

Stacked – Kelly says “It’s the sort of book that lends itself to analysis.”