The Movie Date is a weekly feature where we discuss movies that may appeal to the YA audience. This week’s movie date with Andrew is Ondine, a 2009 film directed by Neil Jordan. 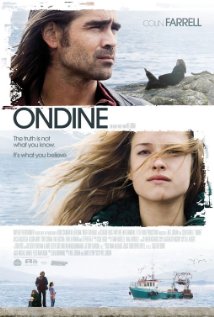 Story:  An Irish fisherman is astounded to discover a live woman in his nets; he is convinced by his disabled young daughter that the lady is a selkie—a fabled seal-human shapeshifter.

Though I’m not deep into fantasy literature or mythology, I was surprised to learn about selkies just last year: speaking at Comic-Con in 2011, author Anton Strout (the Simon Canderous series) amusingly described a Penguin YA meeting in which the senior editors decided that selkies would be the new trend. Though I’m sure they’ve featured in a few books since then, I’m sorry they haven’t caught on; they strike me as much more interesting than mermaids, for instance.

Hoisting up his catch one foggy Irish morning, grizzled Syracuse (Colin Farrell) is shocked to find a female body in amongst the fish—and relieved to find the woman alive and breathing. He gives her shelter at his isolated cottage, then heads into town to take his  wheelchair-bound daughter (shared with an ex-wife) to dialysis. (Lest you think the film be too fanciful, these gritty authentic details help keep it grounded in the real world.) Upon hearing of her dad’s latest “catch,” young Annie is certain the woman is a selkie. After some research, she fills her father in on the details of selkie lore.

According to Annie, the selkie starts life as a seal, then sheds its skin to assume human form and walk on the land. The selkie must find her seal-skin and bury it secretly, after which she is free to live on the land for seven years. She can meet a landsman and take him as a husband. If they make love she will cry seven tears (which may have magic powers?). Selkies can even grant wishes. The one catch: each selkie has a selk-husband, who may come onto land to look for her and reclaim her.

Of course many of Annie’s predictions come true, much to Syracuse’s astonishment. Initially shy, the woman (Ondine) slowly comes to trust the town and its people—and Syracuse and Annie. What’s more, he discovers that the charming woman has a very handy power—by singing her ethereal songs into the sea, she can charm lobsters into Syracuse’s traps and salmon into his nets. It’s handy having a selk around! And though neither is eager to rush into a relationship, they each find themselves attracted to one another.

Though Ondine seems magical enough, the film leaves open the possibility that she could be an everyday mortal, too, with the bits of magic that occur simply being instances of luck. Surprisingly, rather than leaving the truth ambiguous, the film actually commits to either fantasy or reality (I won’t say which) and explains Ondine’s shadowy origins. I will say the ending is completely satisfying and very emotional.

Though the film seems like an adaptation of a classic or modern piece of literature, the story and screenplay were surprisingly both written by the film’s director Neil Jordan (The Crying Game, Interview with a Vampire). Jordan’s Irish background gives this film an authentic Hibernian flavor, and the story is an engaging interweaving of mythology and the modern world. And pretty darn romantic to boot.

Ondine is rated PG-13 and is available now on DVD or Netflix streaming.

10 thoughts on “The Movie Date: Ondine”