The Movie Date is a weekly feature where we discuss movies that may appeal to the YA audience. Andrew is The Reading Date’s resident movie critic and this week he discusses the latest David O. Russell film: American Hustle. 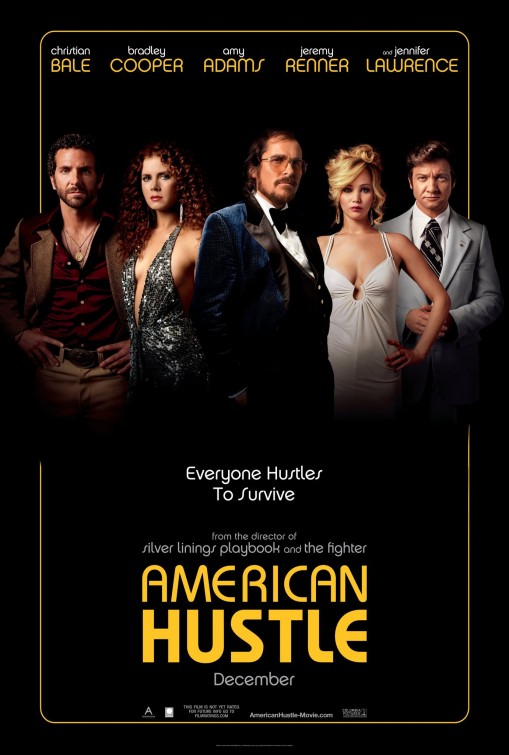 When a brilliant scam artist and his beautiful accomplice are caught by the FBI, an agent cuts them a deal: help us trap politicians taking bribes and we’ll give you your freedom.

I’ve always been a fan of the “gunless thriller,” a suspenseful crime picture where no guns are fired and no one dies. Weapons and killings are such shortcuts to excitement that nearly all thrillers involve them to some degree; it takes determination and finesse to avoid them. Director David. O. Russell (Silver Linings Playbook) has achieved the task beautifully here; as with last year’s Argo, the few guns we see are never fired and the only blood is from abrasions and nosebleeds. Yet this wild and unpredictable scam thriller keeps you on the edge of your seat; there are lives—and loves—at stake here all the same.

To some degree this is a love triangle story, though it’s more of a rectangle really (or even a daisy-chain). In spite of his paunch and combover, scam artist Irving Rosenfeld (a nearly unrecognizeable Christian Bale) has con victims falling at his feet; lovely and whipsmart accomplice Sydney (Amy Adams) is falling for him, too. But Irving has another woman in his life, Rosalyn (Jennifer Lawrence), who won’t be dismissed so easily. When the scam duo is trapped by Agent Richie DiMaso (a curly-haired Bradley Cooper), he forces them to run a scam of his own: entrap Camden, New Jersey mayor Carmen Polito (Jeremy Renner) as he accepts city development funds from a fake Arab sheik. When Sydney sees the hold that Rosalyn still has over Irving, she turns to Richie for comfort. Meanwhile Irving strikes up a genuine friendship with Polito even as he’s about to get the good Mayor sent to prison…

The film is very much Russell’s love letter to Martin Scorsese, bringing to mind Marty’s classics Goodfellas, Mean Streets, and (the flawed) Casino. But instead of continually ramping up the crime action and bloodshed, Russell deftly steps away from the larger scam storyline to focus on the lead characters listed above and their touching personal struggles. Surprisingly we sympathize with all of them, which makes us conflicted: they can’t all be winners but we don’t want to see anyone lose, either. So where the hell IS this film going—and who’s gonna walk away?

Russell has brought back his Playback costars Bradley Cooper and Jennifer Lawrence.

Cooper fuels Richie with a cocaine-fueled intensity and Lawrence steals the few scenes she’s in with the drunken, what-the-hell attitude she does so well. But for me the big news was with the scam couple Christian Bale and Amy Adams; both make such departures from their previous personas you’ll forget everything you’ve seen them in up ‘til now. Bale’s character is deliberately selfish and unattractive, yet you get swept up in his charisma and cleverness.

Amy Adams is the standout. Though her character Sydney is American, the character she plays in scams is a British banking expert. And as she swings from one scam to another and from one man to another, she swoops from glamorous to humble, from bold to vulnerable, from Brit to Yank, from jealous to indifferent so often that even she’s forgotten who she really is. I’ve been a fan of the effervescent Adams since Enchanted but I never knew she had this much darkness and depth in her. It’s hard these days to give the mighty Jennifer Lawrence a run for her acting money but Adams manages it here.

I haven’t mentioned the retro-70s theming or the fact that “some parts of this story are true,” as an opening title card tells us. It’s based on Abscam, a real FBI sting operation of the late 70s-early 80s. It’s a fascinating jumping-off point for Russell’s imagination but this could just as easily have been (all) fiction. What stays with you aren’t the thrills or intrigue or even the Mafia story (featuring a delightful cameo I won’t spoil for you). You’re left remembering the engaging, brilliant characters, lost so deeply in hustling one another that they’ve even started hustling themselves.