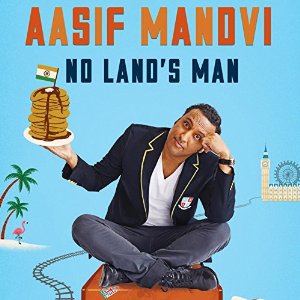 If you're an Indo-Muslim-British-American actor who has spent more time in bars than mosques over the past few decades, turns out it's a little tough to explain who you are or where you are from. In No Land's Man Aasif Mandvi explores this and other conundrums through stories about his family, ambition, desire, and culture, stories that range from dealing with his brunch-obsessed father, to being a high-school-age Michael Jackson impersonator, to joining a Bible study group in order to seduce a nice Christian girl, to improbably becoming America's favorite Muslim/Indian/Arab/Brown/Doctor correspondent on The Daily Show with Jon Stewart.

This is a book filled with passion, discovery, and humor. Mandvi hilariously and poignantly describes a journey that will resonate with anyone who has had to navigate his or her way in the murky space between lands. Or anyone who really loves brunch.

In No Land’s Man, actor Aasif Mandvi recounts his experiences growing up and feeling like an outsider. He moved from Bradford, England to Tampa, Florida with his family when he was sixteen, which was quite a culture shock. In No Land’s Man, Mandvi talks about his experiences as a multicultural actor, leading up to his breakout role on The Daily Show. Check out the very funny book trailer:

It seems like every week there is a new celebrity memoir, though Aasif Mandvi’s wasn’t really on my radar until recently. You may be familiar with Mandvi from The Daily Show, where he is the Senior Middle East correspondent. I must admit I don’t really watch the show, but I looked up Mandvi on IMDB and found I’m familiar with his work in The Proposal and The Internship. So, I was intrigued to listen to this book to learn more about Mandvi’s background. The book cover caught my eye too- isn’t it cute? (The pancakes figure into the story – Brunch is a big selling point for Mandvi’s father’s move to the US)

The early chapters focus on Mandvi’s experiences at boarding school in England, where he was a target of racial bullying and called every name in the book. Race and religion is a recurring theme in the book as Mandvi gets typecasted when he goes for acting roles, and is asked to portray stereotypes.

Mandvi got interested in performing when MTV came around in the 80s. He got obsessed with emulating Michael Jackson’s dance moves, and this got him some positive attention at school, and showcased his entertainer abilities.

Family is also a theme of the book, and Mandvi discusses his parents’ jobs, gender roles, cultural frustrations, food preferences, and humorous anecdotes.

Aasif Mandvi narrates the 4.5-hour audiobook. He is a great storyteller and gets very animated as he shares his stories. The high-energy, consistent performance keeps the listener engaged throughout. The only thing that I thought would have been cool to add though were clips of some of the performances referenced in the book. The audiobook is entertaining and made me want to check out more of Mandvi’s work.

Check out a sample from No Man’s Land, read by Aasif Mandvi:

No Land’s Man is on sale now, and should appeal to fans of The Daily Show, and readers of humorous and cultural memoirs. You can catch Aasif Mandvi next in an upcoming HBO series called The Brink.

Audiobook Review: Modern Romance by Aziz Ansari
Be My Galentine