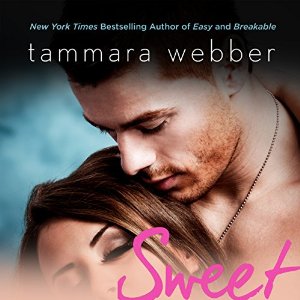 From the author of New York Times best sellers Easy and Breakable - a new standalone novel in the Contours of the Heart series.

He's the love of her life, but he doesn't know it. She's his one moment of sacrifice in a lifetime of survival. He was damaged and wild but resilient. She's always been obedient; now she's restless. Home for the summer between college and med school, Pearl Torres Frank knows two things: Boyce Wynn is the embodiment of everything she should run from and everything she wants to run to. Rebellious and loud. Unconcerned with society's opinion of him. Passionate. Strong. Dangerous. And one more trait he hides from everyone but her: Sweet.

Sweet is a stand-alone companion novel in Tammara Webber’s Contours of the Heart series. While Easy and Breakable were Jacqueline and Lucas’s stories, Sweet features Boyce and Pearl, two of Lucas’ friends from his hometown. Boyce and Pearl have had a special connection ever since Boyce saved Pearl’s life as a child, and now circumstances have brought them together again. Is the time right for a second chance at love? This book is new to audiobook format so I recently gave it a listen.

The Contours of the Heart series is one of my favorites, but I wasn’t sure if I would like a book about a different couple. I did end up liking Boyce and Pearl (they appear in Breakable) a lot and rooted for their HEA.

Sweet is told in dual perspective, and also includes flashbacks. Boyce and Pearl share a history and the flashbacks help to fill in the blanks. The moment when Boyce saved Pearl bonded them for life and it was sweet to see how the event tied them together in so many ways.

Pearl has been away at college while Boyce stayed behind fixing cars in his dad’s shop. Pearl has been following a school/career path to please her mother but now wants to follow her own path and be a marine biologist. Boyce encourages Pearl to follow her dreams, even though it means she’s on her own for the first time.

Boyce has had a rough time of it, losing his brother, and facing years of abuse at the hands of his father. Now there’s a new crisis that Boyce can’t see his way out of.

Like in Easy and Breakable, there are some dark issues featured in Sweet, most notably domestic violence. I could have done without a certain villainy character’s storyline, but for the most part I thought these important issues were portrayed well.

The supporting characters in Sweet also add to the story, and I especially liked Sam, the high school mechanic who works with Boyce. And it was a treat to see some special cameo appearances from favorite characters!

I listened to the audiobook, read by Christy Romano (The Mara Dyer series) and Zachary Webber (Breakable, Maybe Someday). I had actually read the book before listening to the audiobook and preferred the audiobook experience. Though the author does make each POV sound distinct, it’s nice to have dual narrators in the audiobook, and both Romano and Webber sound like how I envisioned their characters. The audio production is well done and the story flows nicely in this format. Though flashbacks are part of the story it didn’t make the audio tricky to follow.

Sweet was a sweet listen and I look forward to Tammara Webber’s next book! I hear she’s writing about a character from Easy for the next Contours of the Heart novel.

He Will Be My Ruin by K.A. Tucker