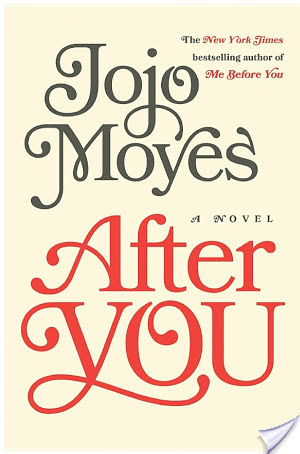 Also by this author: Me Before You

How do you move on after losing the person you loved? How do you build a life worth living?

Louisa Clark is no longer just an ordinary girl living an ordinary life. After the transformative six months spent with Will Traynor, she is struggling without him. When an extraordinary accident forces Lou to return home to her family, she can’t help but feel she’s right back where she started.

Her body heals, but Lou herself knows that she needs to be kick-started back to life. Which is how she ends up in a church basement with the members of the Moving On support group, who share insights, laughter, frustrations, and terrible cookies. They will also lead her to the strong, capable Sam Fielding—the paramedic, whose business is life and death, and the one man who might be able to understand her. Then a figure from Will’s past appears and hijacks all her plans, propelling her into a very different future. . . .

For Lou Clark, life after Will Traynor means learning to fall in love again, with all the risks that brings. But here Jojo Moyes gives us two families, as real as our own, whose joys and sorrows will touch you deeply, and where both changes and surprises await.

Me Before You is Jojo Moyes’ smash hit novel from 2012, and now she’s back with a sequel called After You. Me Before You followed heroine Lou, caregiver to a quadriplegic named Will. In After You, Lou is dealing with the aftermath of her time with Will, and working at an airport bar but not going anywhere herself. An accident forces her to deal with the past head on and find a way to move forward.

I didn’t re-read Me Before You before diving into After You so the details weren’t fresh in my mind, but the author does a good job getting the reader up to speed. (I’d recommend reading the books in order, though!) Me Before You deals with some heavy topics and many of us were left a sobbing mess at the end. Thankfully, After You is a gentler read that doesn’t leave as many battle scars. I was actually surprised to hear the author say that readers were begging for a sequel because it MBU seemed like a solid standalone to me. But, it was great to revisit Lou and other familiar characters to see how they were getting on (or not) with their lives.

In After You we see more of Lou’s world, including characters old and new. Lou’s family takes on a larger role, along with her Moving On Circle (support group) and other surprise appearances. Lou finds a new purpose in life but maybe isn’t learning the lessons she needs to move forward.

I appreciated the humor but also the insights on grief from the Moving On Circle. After You portrays a realistic look at the grieving process and helpful tips for living after a loss.

There is some silliness with the plot (particularly Lou’s family) that helps keep the tone light. And a new face brings back the past (and drama!) for Lou. A new guy enters the picture too.

I was halfway through the After You e-book when my hold for the audiobook came through at the library. So, I switched back and forth between reading and listening. I was surprised to see that this audiobook has a different narrator than Me Before You. Susan Lyons is replaced with narrator Anna Acton. Lyons narration was so outstanding that I was disappointed she wasn’t back, but Acton also does a fine job bringing Lou’s story to life. I didn’t want to stop reading or listening so I was glad to have both formats on hand. Take a listen:

After You is the sequel to Me Before You that I didn’t even know I wanted but it ended up giving me the closure I needed. I like the way Lou’s story ended here but can’t help but wonder if Moyes has more stories in mind! At least we have the Me Before You movie to look forward to.

Update after seeing the MBY movie: I liked it and thought it remained true to the spirit of the book. I did tear up a couple times so I recommend leaving your makeup and contact lenses at home. Thought Emilia Clarke and Sam Claflin were well cast and had good chemistry. It’s not perfect but it’s worth a watch. It made me want to re-read After You to continue Lou’s journey. Have you seen the movie or do you plan to? What did you think?

Under Pressure: Top Ten Books You Must Read
Top 10 Books That Make You Feel
Top Ten Books I Want To Read But Don’t Own Yet
Best of 2013 – Audiobooks

My Life Next Door by Huntley Fitzpatrick
If I Stay and Where She Went by Gayle Forman Audiobook Reviews
Blog Tour: Highly Illogical Behavior by John Corey Whaley

2 thoughts on “Book Review: After You by Jojo Moyes”