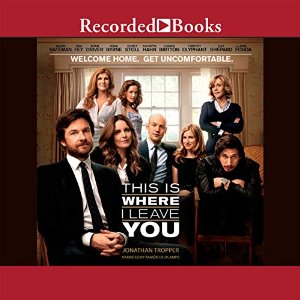 The death of Judd Foxman's father marks the first time that the entire Foxman family - including Judd's mother, brothers, and sister - have been together in years. Conspicuously absent: Judd's wife, Jen, whose 14-month affair with Judd's radio-shock-jock boss has recently become painfully public.

Simultaneously mourning the death of his father and the demise of his marriage, Judd joins the rest of the Foxmans as they reluctantly submit to their patriarch's dying request: to spend the seven days following the funeral together. In the same house. Like a family.

As the week quickly spins out of control, longstanding grudges resurface, secrets are revealed, and old passions reawakened. For Judd, it's a weeklong attempt to make sense of the mess his life has become while trying in vain not to get sucked into the regressive battles of his madly dysfunctional family.

I love a good dysfunctional family story, and This is Where I Leave You features the ultimate family train wreck. In this book, the Foxman family gathers to remember their recently deceased father Mort. He wants them to sit shiva for a week, and that brings the family under one roof for socializing, reflecting, and fighting. Personalities clash, old wounds reopen, and secrets slip out in this dramedy.

The reason I picked this one up is because of the upcoming movie release. The movie has an all-star cast featuring Jason Bateman, Jane Fonda, Tina Fey, Connie Britton, Dax Shepard, and on and on.  I saw the trailer with all these funny people and it sparked my interest in the book. The movie reminds me of those dysfunctional family comedies like Little Miss Sunshine, The Royal Tenenbaum‘s and The Family Stone. And from what I’ve seen so far it looks like the movie is very similar in tone to the book.

The book is written in the dejected Judd Foxman’s POV. His life is turned upside down when he catches his wife in bed with another man, and now he’s grappling with his father’s death and dealing his siblings baggage and other skeletons in the closet. He and his three siblings may all be grown now, but being back at home (with the spouses and kids in tow) brings back some juvenile tendencies.

The tone of the book is darkly comic, and the book’s narrator Judd is wry and bitter. It’s one of those books where the situations get more and more outrageous, and you’re wondering what could possibly happen next to this family. There is an eccentric cast of characters that bring comic relief to what is obviously a sad occasion, and the revelations come on fast and furious.

I listened to the audiobook, performed by Ramon de Ocampo. His delivery is great, and his voice kind of reminded me of Steve Carell, so I was kind of imagining Carell as Judd when I was listening. The narrator has a deadpan style that gels nicely with the book, and de Ocampo delivers an engaging performance. There are a lot of different personalities for de Ocampo to inhabit, and he gets into character without going over the top. A quick listen, overall.

I’m glad the movie got me to read this book and introduced me to Jonathan Tropper’s writing.  I like his writing style and look forward to reading more from him. If you like dark humor (and very adult humor) give this one a try before the movie comes out.  Check out the movie trailer:

6 thoughts on “This is Where I Leave You Audiobook Review”