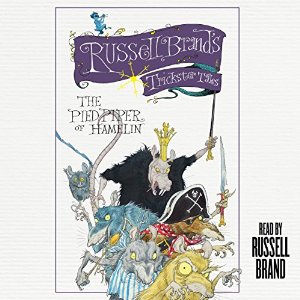 With this first book in Russell Brand's Trickster Tales series, the famed comedian, actor, and best-selling author delivers a hilarious retelling of an old fairytale favorite that will appeal to adults and children alike.

Once upon a time, long ago, in a time that seemed, to those present, exactly like now except their teeth weren't so clean and more things were wooden, there was a town called Hamelin. The people of Hamelin were a pompous bunch who loved themselves and their town so much that if it were possible they would have spent all day zipped up in a space suit smelling their own farts. But space suits hadn't been invented yet, so they couldn't.

So begins Russell Brand's wildly funny and surprisingly wise retelling of the classic tale "The Pied Piper of Hamelin". Whether you're a kid or a grown-up kid, you'll be chuckling the whole way through this zany story that bypasses Brand's more adult humor for the outrageous, the madcap, and the just plain silly.

Maybe you've heard about the Pied Piper before, with his strange music and those pompous townspeople and pesky rats. Or maybe you haven't. But one thing is for sure: you've never heard it quite like this.

Russell Brand puts his own spin on the Pied Piper story in The Pied Piper of Hamelin, the first installment of The Trickster Tales.

The Pied Piper story, like many fables, has always been a bit creepy to me. You know the story: the pied piper is called to town to deal with a rat problem. The mayor promises to pay for his services, but while the piper keeps up his end of the bargain the mayor balks at payment. As revenge, the pied piper leads all the town’s children away. Pretty disturbing stuff, right?

With The Pied Piper of Hamelin, Russell Brand kicks off his Trickster Tales, updates on classic fables. This book encourages kids to question the meaning of the story and to become free thinkers in their everyday lives. Brand doesn’t talk down to kids and wants them to interpret the story in their own way.

This book is aimed at kids and plays up the rats and the bathroom humor. While that humor is not really to my taste, I bet kids find it hilarious. I like that Brand sets out to make the classic story relevant to kids today.

The book version has illustrations by Chris Riddell, and I imagine the illustrations really enhance the story. However, I think the best of both worlds is to pick up the audiobook to read along with the book. I listened to the audiobook, read by the author Russell Brand. Brand is a boisterous storyteller who makes the story very lively and entertaining. He sometimes reads in a soft, quiet tone, and then suddenly gets loud and animated as the story dictates. Brand puts a lot of personality in his reading and is a natural storyteller. I bet this would be fun to listen to on a holiday family road trip.

Check out an audio sample of The Pied Piper of Hamelin:

Look out for more of Brand’s Trickster Tales, where next he takes on Rumpelstiltskin or The Emperor’s New Clothes.

Book Spotlight: Between the Lines series by Tammara Webber
Blog Tour: The One That Got Away by Bethany Chase

3 thoughts on “Audiobook Review: The Pied Piper of Hamelin by Russell Brand”