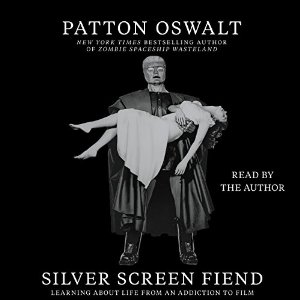 New York Times bestselling author, comedian, and actor Patton Oswalt shares his entertaining memoir about coming of age as a performer and writer in the late ’90s while obsessively watching classic films at the legendary New Beverly Cinema in Los Angeles. Between 1995 and 1999, Patton Oswalt lived with an unshakeable addiction. It wasn’t drugs, alcohol, or sex. It was film. After moving to L.A., Oswalt became a huge film buff, absorbing classics and new releases at least three nights a week at the New Beverly Cinema. Silver screen celluloid became Patton’s life schoolbook, informing his notions of acting, writing, comedy, and relationships. Set in the nascent days of the alternative comedy scene, Oswalt’s memoir chronicles his journey from fledgling stand-up comedian to self-assured sitcom actor, with the colorful New Beverly collective supporting him all along the way.Ideally timed for awards season, when everyone’s mind is on Hollywood, Silver Screen Fiend follows up on the terrific reception of Oswalt’s New York Times bestselling debut, Zombie Spaceship Wasteland. Already a beloved fixture on the comedy stage, on television, and in film—not to mention his 1.87 million Twitter followers—Oswalt announces, with this second book, that he’s also here to stay on the page.

In Silver Screen Fiend, actor/comedian Patton Oswalt talks about his addiction: film. In the 90s Oswalt was trying to get his standup career off the ground, and meanwhile spending every spare moment at the movies. LA’s New Beverly Cinema became his own film school of sorts and he’d check off the movies he saw in his film encyclopedias. He became very well versed in the world of cinema but wondered if he should get out of the darkness sometimes too.

I was surprised how much I could relate to this book! Yes, I loved going to see films in the 90s too, and occasionally even ventured to the New Beverly. But, really, I have my own addiction I suppose- to books! (YA fans have you seen Oswalt in the movie Young Adult? A classic.) I was nodding in recognition to his acknowledgment that more balance was needed in his life. (“Less movies, more living” he says) Was his time spent watching movies hurting his chances at relationships or holding him back from career success?

I listened to this book fittingly on Oscar Sunday, a holiday of sorts here in LA. Silver Screen Fiend is a love letter to movies and in particular the New Beverly Cinema (an LA institution now owned by Quentin Tarantino.) Oswalt discusses seeing classic films, sometimes more than once, all in the name of one day becoming a great auteur.

In between talking about his time spent at the movies, Oswalt chronicles his standup, writing and acting career in the 90s. He talks about writing for MADtv, acting on The King of Queens, and his standup success at The Largo.

Patton Oswalt narrates the audiobook and gives a lively performance. I think humorous memoirs really shine in audio format and Oswalt really is a great storyteller. I’d recommend listening to this one if you can. The audio is just over 4 hours long and quite entertaining, like a standup performance. There is a bonus PDF included with the audio that includes a list of the films Oswalt viewed during 1995-1999 (play along and have your own film festival!) and sample calendar’s of Oswalt’s film and improv dates. Listen to an audiobook excerpt: